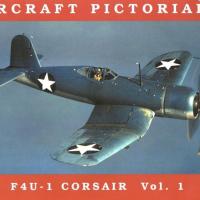 Thank you to Classic Warships Publishing for providing another exciting volume in the excellent Aircraft Pictorial series. I am also very appreciative of the IPMS Reviewer Corps for allowing me the chance to examine this volume and report my opinions.

This volume is the seventh in the Aircraft Pictorial series, adding a definitive research work describing an iconic U. S. Navy aircraft. Author Dana Bell initially hoped to address some areas of disagreement in previously published works through more research on the Corsair. Much new material was recently made available at the National Archives, material that not only allowed him to address these areas of disagreement, but to conduct additional new research. He discovered that there was enough new material that more than one Aircraft Pictorial would be required. This first volume describes the F4U-1 Birdcage models, with a promised second volume to cover the F4U-1 raised cockpit versions. I am very pleased with this first volume, and would expect to the same reaction to the second.

The volume strikes a pleasant balance between an engaging writing style and professional presentation of information and data. A brief but thorough general history highlights the many versions, quirks and other intriguing aspects of the early Corsairs. Details of construction and radio mast problems are followed by a particularly valuable description of different paint schemes and other color treatments. I especially liked the annotated serial number data listing subdivided into each of the three manufacturers. Notable airframes are called out in each category.

After the general history section, the book layout changes to succession of annotated photos with a few color diagrams. The photo annotations are a mostly continuous linked dialogue presenting information in the context of the associated photos. Think of this layout as more pictures with better connected text. This is a different approach from many publications where each photo has a stand-alone caption and a text reference, e.g., “see figure x.” I found Dana Bell’s approach to provide a very enjoyable way to read and research from a scale modeling perspective, allowing me to examine the images and see the narrative in a richer form than a short caption. The large majority of the photos are in black and white, often with original notes and markups, adding an extra level of understanding. There are many interior detail views, showing engine layout, radio equipment, framing, hydraulics, etc., all of which provide a great sense of the aircraft design, and of course provide lots of fodder for those inclined to super detail a model. I have not seen many of the photos used in the volume. Few of the images have “show room” subjects with fresh paint and most show operational, worn and weathered planes. Pages 32, 33, 36 and 37 have color figures illustrating markings and camouflage schemes of early Corsairs, including very interesting gradational patterns. I found the dimension lines in the figures to be a nice addition. I often struggle with correct placement of decals and sizing custom decals. The numerous general arrangement drawings also provide a good sense of the overall aircraft layout.

I found myself to have more than just a very good sense of the aircraft when finished with the volume. I’ve been lucky to see, feel and hear different Corsair versions flying. A Harley Davidson might be cheaper to operate, but it has nothing on a P&W 2800! Dana Bell’s work added considerable depth and context to my appreciation of this aircraft beyond previous publications on the F4U. I discovered a great deal of background information on the Corsair that I was unaware of. There were many subtle variations in designs, such as the tail wheel and strut arrangements, the radio masts (that often failed or were removed), and experimental designs to improve pilot survivability. I was surprised to read that the carrier suitability problems described in previous works were not the primary reasons for later wartime deployment of Corsairs. He describes the primary reason as the challenge of maintaining another supply line onboard for another ship borne aircraft.

I highly recommend this excellent volume describing the F4U birdcage variants. It is a wonderful fresh look and addition to my Corsair references. Dana Bell has done a great job and I am very much looking forward to Volume 2!

Thank you again to Classic Warship Publishing and the IPMS Reviewer Corps. It doesn’t get much better than working with folks like you!