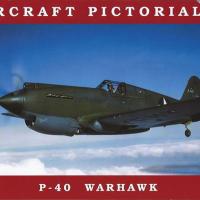 This book is number 5 in the Aircraft Pictorial series. The author is well known for his attention to detail and research methodology that brings rare photographs and little known details to light. This book does not disappoint.

This particular volume deals with the early P-40s used by the US, often referred to a “long nosed” due to the look of the nose with the elongated gear box on the Allison engine. The British Tomahawks are not covered but do make a cameo appearance, in a way. How, is due to the fact that the original P-40-CUs had a frequent ground loop problem; 50 sets of Tomahawk wings were diverted from British orders to repair damaged USAAC P-40-CUs, thus creating the P-40G, a hybrid with a P-40-CU fuselage and four-gun British Tomahawk wings.

The book begins with an overview of the development, production, and modification, as well as camouflage and markings, of the early US P-40s. But don’t let the word “overview” mislead you. There is a good deal of detail and information within these first pages. What follows are 68 pages of photos showing both internal details as well as overall coverage of the external views of the various models. The captions point out the differences and details contained within these pictures.

There is a lot of information contained here, and it can be used to help the modeler build a better early P-40 (if we can ever get one in 1/48) for most scales. Still, there are many subtle differences between these early P-40s, and according to the author the original drawings and most of the information on these early P-40s have been lost over time. Perhaps they await in a mislabeled file or in a box in some cavernous government storage facility. One can only hope. But until their discovery, what we have here is probably the best reference on the early US P-40s available.

I really enjoyed this book. It is packed with photos and information., It is well researched and written and includes some gorgeous color pictures. This is an outstanding book! I cannot recommend this highly enough to modelers, P-40, WWII and aviation historians alike! I strongly feel that you will not be disappointed.

My sincere thanks are offered to Classic Warship Publishing and IPMS/USA for allowing me to review this book.