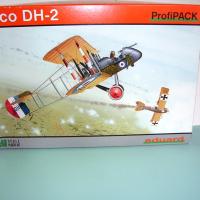 To briefly describe the aircraft, it was a single sweater pusher, bi-plane, powered by a 100 HP Gnome rotary engine. The lack of synchronizing mechanism made this necessary to have a forward firing machine gun allowing the pilot to "aim" with the aircraft and gun at the same time.

The kit is composed of 62 plastic parts, 36 photo-etched parts, a clear acetate sheet with a choice of two windscreens, depending on which version of the aircraft you choose to build; painting masks are also provided plus a decal sheet for four different aircraft. The detailing on the plastic parts is up to the usual superb Eduards standard.

The nacelle containing the cockpit and engine assemblies went together like any normal model. The cockpit extends well forward of the upper wing and its interior is very visible. It begs for, and you should give it careful attention. Eduard supplies, a detailed interior that makes this possible. Externally the details on the nacelle, ammo-drums, etc are exceptionally well done. Careful enhancing of the stitching here will pay great dividends on the final appearance of the completed model.

The wings were painted next.(Gunze Paints were used throughout). Weathering and a "Translucent effect" on the under surfaces of the wings, horizontal stabilizer and elevator goes a long way in making the model realistic and eye appealing!

I approached the tail boom assembly with, to say the least, great trepidation"! To my surprise, delight and great relief, it went on, and locked in place beautifully! This is not to say that it doesn't have to be handled carefully and gently. It is very fragile. However, once glued in place, it proved very sturdy. Mounting the upper wing on the eight inter-plane and eight cabane struts was an experience all in itself. The decals went on well, responded to the setting solution with no problems.

I am not a great enthusiast of etched brass. Sticks to everything but what I want it to. However, it looks great and I'm sure you super-detailers will do it and your model proud! Without a full length fuselage, handling of the model is precarious. Picking it up by the boom is a fool’s errand. The wings are the only "handle". Be careful!

Rigging the tail boom is not for the faint of heart! I used stretch thread for all rigging. Working on the cross wires that run fore and aft between the inter plane struts is a good way to get cross eyed. On rigging the boom! Careful, pulling one wire too tight will twist the whole thing out of line. When done it is a beauty to behold.

Final verdict! A challenge well worth the time and effort. How long did it take? Don't know-don't care! I enjoyed the challenge and I'll do it again. Someday

Many thanks to Eduard Hobby Accessories for another great kit and IPMS/USA for this sample to review. Keep them coming.