Air War Over Kursk: Turning Point in the East 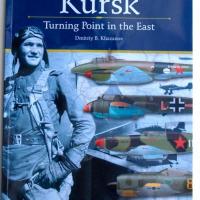 Whenever “Kursk” is mentioned, my thoughts turn to the massive tank battles that took place between the German and Soviet armies in July/August 1943. This book reminds us above that battlefield, a fierce air campaign was also taking place. After their disastrous defeat at Stalingrad in February 1943, the German High Command believed the Soviets, despite their victory, had been gravely wounded and unable to replace lost men and equipment. Thus, they planned a large summer offensive aimed at a narrow front near the town of Kursk, located about 250 miles south of Moscow. The code name for this plan was “Zitadelle.”

The author delves deeply into the planning and execution of this battle from the perspective of not only the commanders on both sides, but also of the participants. He explains how the Luftwaffe was to take the place of supporting artillery for the tank columns and how the Soviet Air Force was unable to adequately respond during the early stages of the battle. The chapter titles give a good idea what takes place in the book:

Khazanov shows how the Soviets were able to overcome their initial set-backs and seize the offensive when the Germans weren’t able to replace losses due to their fighting in Italy and the bombing of their homeland.

Throughout the text, there are numerous B/W photographs taken of both protagonists. Also, there are numerous color profiles of all the German and Soviet aircraft that participated in the battle. The appendices themselves, all fourteen pages worth, are a wealth of information about the units that fought in the battle, their sortie count, and their losses which were horrendous on both sides. Russians lost almost 2800 aircraft while the Germans wrote-off 1463 aircraft with another 1000 damaged and needing repairs.

While I enjoyed learning about this important air battle, I found the book a little difficult to read. Occasionally, I would lose track of exactly which side was doing what and had to reread previous sections to clarify who the author was describing. As a modeler, I could use the many period photos and the color profiles as references. Overall, however, I recommend this book to those more interested in the historical aspects of this battle. The author has written a thoroughly researched narrative on the use of airpower by both sides.

My thanks go to SAM Publications for the opportunity to review this book.