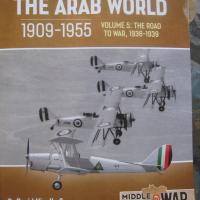 This book is part of a series explaining the historical developments of military and civil aviation in the Arab World. This includes Morocco, Algeria, Tunis, Libya, Egypt, Palestine, Israel, Lebanon, Syria, Turkey, Iraq, Kuwait, Saudi Arabia, Yemen, and Iran. After the end of World War I, these regions were in the process of moving from European colonial rule to independence, with Britain and France in decline, while Germany and Italy were attempting to increase their influence. At the same time, aviation was slowly improving, and the Middle Eastern areas were developing more sophisticated aviation facilities. The British were probably the most involved in colonial developments, while France and Spain were in decline.

The authors of this book describe the process which saw the growth of more modern aviation establishments in such places as Egypt, Palestine, Iraq, and other Arabian regions. Most of these regions were governed by monarchies which had limited popular support, and the major portion of this volume deals with developments in Egypt, which fought to remove the British military from its dominant position, replacing it with local personnel who were trained locally. Of course, they had to have airplanes and other weaponry to equip these forces, and since there was no armaments industry in the region, they had to look to England, France, Germany, and Italy for suitable aircraft.

The authors handle this by describing the people involved in this process. Military leadership positions were usually assumed by locals from upper class backgrounds, with lower classes providing the non-commissioned officers. The authors go into extensive detail describing the process by which these leadership changes occurred. Only a few of the Middle Eastern ruling classes were actually trained as pilots, although some had personal aircraft flown by trained nationals.

The book primarily covers events in Egypt, Arabia, and Iraq in the immediate pre-war period, with the most detailed coverage of Egyptians acquiring the technology and organization to hold on as the developments in military technology occurred. The Egyptians were trying to push the British out, while events moved towards the outbreak of World War II. The British wanted to hold on and protect the French-owned Panama Canal, while keeping the Germans and Italians from penetrating the area. It is a very complicated and confusing story, and the authors provide a lot of information of the Middle Easterners who play significant parts in the process.

One of the major problems in Egypt was fact that the Army leadership influenced the government more than the aviation sector, and rank and political influence seemed to be more important that military expertise. Decisions dealing with aircraft type selection were not always rationally made, and the long-range plans were not always decided upon by the most qualified commanders. The aircraft are described in some detail, and most of the types are illustrated using period photos. Reading through some of the photo captions, some of the information seems inaccurate, such as some of the photos of Hawker Fury and Audax types. One amusing error is the fact that the color drawing of the Avro 641 Commodore, carrying an Egyptian civil registration which photos and text describe as SU-AAS, is boldly marked in the color drawing as SU-ASS.

I have not seen the previous volumes of this work, but I think that the authors do a fine job of describing the sequence of events which caused aviation history to develop in the Middle East in the prewar years as it did. There is a considerable amount of information on each aircraft type, and generally good period photos to illustrate markings and details. Some types are not covered, but they may be illustrated in earlier or later volumes. The photos, however, were originally taken during the time period in question, and are therefore useful to modelers in providing the correct colors and markings.

There is a lot of material that deals with non-aviation military issues, but even this makes the text more interesting and readable, illustrating some of the problems faced by the Europeans when dealing with Middle Eastern cultures. But for modeling, this book is useful, but I would hope that other volumes provide more photos and data.

This is a subject that we have needed coverage on for a long time. Thanks to the authors for providing this information. I know it will be very useful to me in my modeling and understanding of the historical time period. Highly recommended.

Thanks to Helion Publications, Bill O’Malley, and Phil Peterson for the review copy.