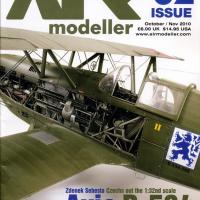 This publication bills itself as “SHOWCASING THE VERY BEST IN SCALE AIRCRAFT MODELLING”. Believe it! Everything about this publication is Quality (note capital “Q”).

Aside from a self-advertisement on the inside back cover (subscriptions) and another on the outside back cover (for MAX MODELLER) there are no advertisements. That means that content is only modelling and not advertising to expand the page count. Even at that it has 64 pages of solid modelling information and building. At the cover price of US$14.95 it is a bargain in today’s market without advertising support.

The publication is full color and printed on heavy matte paper. Nothing is cheap or skimped. My only complaint has to do with the publisher’s occasional penchant for using a font color with not enough contrast from background for my aging eyes. Example: Black font table of contents against an olive background. The publisher’s masthead, on the same page, is in a much smaller font, making that even more difficult to read.

Now for the good stuff: Each article is especially well written with detailed photos and descriptions. Detailed descriptions follow through to photo captioning. All photos are very well done with detailed content showing what they intended to show. No guessing is needed.

The B-26 article was a little strange at first because the Table of Contents called it a Marin B-26. It ook me a while before figuring out they dropped the “t” in Martin. Twice! (This error did not carry through to the articles themselves.) Other than that the article is a great feature with diorama detailing included. The build article was followed by another written about the history of the aircraft including a nice selection of photos. Photos included pristine factory shots and action shots; including battle damage and war-weary.

Eight pages of photos take at the 2010 IPMS/USA Nat’s in Phoenix are included as a bonus. All photos are of the usual publication quality, i.e. in focus, tight cropping and showing what a modeller would be interested in.

The cover article is absolutely specatcular. The subject is HpH Model’s 1/32 scale Avia B-534. The kit is resin and has 152 parts including metal strengthening rods molded inside the wing and landing gear struts. The canopy is described as clear, bubble-free resin when most manufacturers would use a vac-form. The level of detail in this kit build is incredible. This article is followed by a two-page spread showing details of an actual aircraft in a museum display.

Even if you feel you could never build any model at the level of the authors in AIR Modeller you can learn from the techniques used and that is the true value here. Every article follows the same pattern with detailed descriptions of the build; relevant and detailed photos and is frequently followed by a history of the type. Each issue concentrates on only a small number of build subjects and this allows for more detailed and a deeper depth for each subject.

My thanks to Air Modeller and IPMS/USA for my review copy.

Lead page on B-26 article

Support equipment in B-26 article