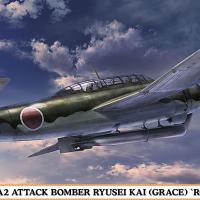 Given the codename "Grace" by the Allies, the Aichi B7A Ryusei was a large and powerful single engine, two-seat carrier-borne torpedo-dive bomber. It was produced by Aichi Kokuki KK for the Imperial Japanese Navy Air Service during the Second World War. The B7A first flew as a prototype in May 1942, but problems with the experimental NK9C Homare engine and airframe issues delayed the type and it didn’t enter into production until two years later in May 1944. Despite the plane's weight and size, it displayed fighter-like handling and performance, it even outperformed the A6M Zero which was in service at the time. Not only was it was a fast, agile and highly maneuverable machine, it could also carry a single 800 kg bomb, two 250 kg bombs or six 60 kg bombs at once.

In June 1944, IJN Taiho, the only Imperial Japanese Navy aircraft carrier then large enough to operate the B7A Ryusei in its intended role, was sunk during the Battle of the Philippine Sea before B7As were even available to embark. Unfortunately for the IJN, they had no other carriers that could launch the B7A. The Japanese completed only one other carrier capable of operating the B7A, IJN Shinano, but she was sunk by an American submarine in November 1944, just ten days after being commissioned. Thereafter, the B7A was relegated to operating from land bases, primarily with the Yokosuka and 752nd Air Groups. Nine prototype B7A1s were built and 80 production version B7A2s were completed by Aichi before a severe earthquake in May 1945 destroyed the factory at Funakata where they were being assembled. A further 25 examples were produced at the 21st Naval Air Arsenal at Omura.

My sample arrived in the typical Hasegawa box for a kit of this size. The box is the standard glossy top featuring beautiful artwork. Inside I found one high quality Hasegawa plastic model kit, approximately 130 parts, one set of poly caps, the standard instructions, and one decal sheet. The kit features excellent engraved surface detail, bulkhead detail, detailed cockpit and gunner station, multi-piece canopy, radial engine detail with optional cowlings (open/closed), 1-piece propeller with separate spinner, detailed undercarriage, underbelly torpedo case, optional (91 shiki kai3 torpedo or 250kg bombs), wing cannons and rear cockpit machine gun. Torpedo parts or 250kg bomb parts can be selected. This kit has been around for a while and reboxed several times. It has stood the test of time, it’s a well-engineered kit even by today’s standards and judging by the plastic the molds apparently are still in excellent condition.

It also includes markings for (2) Aichi aircraft: 10th and 44th.

I started by building up the cockpit and rear gunner’s cabin, and encountered no problems. Once I was ready to close up the fuselage the next step in the instructions offers the option of the bomb bay open including payload and bomb racks or closed if you wish to add the torpedo, build accordingly. The bomb option looks very nice and well appointed with plenty of details, however, I went with the torpedo. After closing up the fuselage, I assembled the wings and added them along with the tail pieces. Next I added the open cowl flap option, engine, and cowling. The landing gear went together next, and all the pieces aligned themselves perfectly. I finished the build by adding all the rest of the smaller parts. All the parts and pieces cleaned up neatly and fit snugly together and perfectly. I encountered no issues worth mentioning. I really enjoyed this one.

I highly recommend this one to anyone I give it a 9 outta 10 on the Greg-O-Meter. I would like to thank Hasegawa, Hobbico and IPMS USA for the opportunity to present such a fine offering.

Closeup of torpedo rudder and propeller

Finished aircraft, above
Previous Next

I loved this build. Added…

I loved this build. Added pilot and bombardier from my "parts" bin, Discovered the "extra" hinged bomb bay doors, and decided to build it with one 800 KG bomb in the open bomb bay.