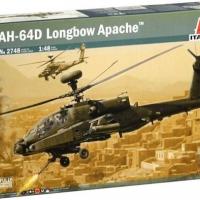 The Boeing AH-64-D Longbow is a twin-turbo shaft attack helicopter with a nose mounted target acquisition and night vision systems which makes it incredibly destructive. Longbow-equipped Apaches can locate up to 256 targets simultaneously within 50 km; the fire control radar is able to crush the enemy beyond sight range.

Upon opening the box, I found there to be 4 sprue's - 3 grey and 1 clear. Also included were the instructions for five different markings and stencils plus a decal sheet. The first thing I always do is to remove the clear sprue and pour future over them. This will stop a lot of problems later. Inspecting the rest of the grey sprue's I found no sink holes on the outside of the parts, but there were a few on the inside that were not going to be seen at final display.

I started with the cockpit. I had no problems with the tub and controls, when it came to the clusters there was quite a bit of prefitting the parts. Be careful at this point; you want be aware that the instructions have the right side cluster attached in an area that I found to be outside of the canopy at a later point. This is where the instructions have to be read carefully and checking fit is important.

Next I moved on to the rotor assy. When I removed the blades from the package, they were a couple of different shapes then needed. In order to reshape them, out came the hair dryer. As most of us have found out heating up plastic parts with one can cause serious damage. So the utmost care in this step is highly recommended. After a little trial and error I finally had the right droop in them.

In step 2 you must pick which version you want to portray. there are specific parts for different versions. I chose version B, US Army, Valparaiso-Eglin, AFB, Florida, USA,2004.

Starting the rest of the assembly I found a problem with some of the instructions. There are no names for parts or call outs. When doing a build I would like to be able to learn the names of the parts of the subject. A minor thing but learning from modeling is a great benefit to have.

Since the colors are flat olive and flat black, painting was easy. So I just removed the parts painted flat olive and assembled those onto the aircraft.

The ordinance was next and the assembly went fine but painting was a little more difficult due to the complicated schemes. The nose of the bombs are painted azure blue. The ring around them is the difficult part. I found it best to pour some paint into the cap and dunk the nose of the bomb. The next part was to install the decals on the bombs. I found the stripes to be too long for the circumference. After a little trial and error I precut the stripes before installation. I cut the stripes 2.5 mm between fins, 13 mm around bomb, and 4mm between U.S. Army decals which fixed the issue nicely.

On the instillation of the gun I made sure it was aimed the same as the fire control. Cockpit glass is next I chose to close it but it can be displayed open. Always test fit glass. When I fit the glass, I found an area at the top of the fuselage that needed to be filled behind the glass. I did this with a little super glue and sanded very carefully. It was simple to do and touch up with paint. After fitting the glass I masked it off and spayed it flat olive. After putting all of the sub assembly's together I was ready for decals .They went on without any trouble, complementing the kit.

I would highly recommend this kit.

I would like to thank Italeri and Hobbico for the opportunity to review this kit.