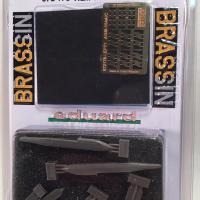 The AGM-154 Joint Standoff Weapon (JSOW) is manufactured by Raytheon Company and gives a precision strike, launch and leave capability. The JSOW has a stand-off range of around 12 miles when launched at low altitude and around 70 miles when launched at altitude. The weapon weighs around 1,000 lbs. and has different payloads depending on which variant it is. The AGM-154A carries 145 BLU-97 sub-munitions and is used to attack fixed and moveable soft targets such as parked aircraft, trucks, APCs and surface to air missile sites. The AGM-154C is equipped with a 500 lb. blast/fragmentation/penetrator warhead and is used to attack fixed point targets such as buildings and hardened tactical targets. The JSOW uses a global position/inertial navigation system for guidance and the C model has a terminal IR seeker. Over 400 JSOWs have been used in combat in Afghanistan and Iraq since it entered service in 1999. (US Navy Fact File)

This set provides two of the Block I versions of the AGM-154A/C JSOW. Each weapon consists of 4 resin parts (missile body, wings and over-wing fairing) and 6 photo-etch brass tailfins. As the wings are only deployed after the weapon has been launched or for a static display on the ground, I superglued the wings in the folded position and then attached the over-wing fairing/cover. Next I attached the two horizontal tail fins and once these were set, I attached the other 4 fins in an “X” configuration.

Painting is simple as the weapon is FS 36375 overall. A quick shot of Future and you are ready for decals, all 3 of them. I believe decal #1 is for the terminal IR seeker of the AGM-154C (although I was not able to find any documentation to back this up) so I would skip decal #1 if you are making an AGM-154A. The decals conformed very nicely to the kit with a little help from Micro Sol and Micro Set and once dry, they were sealed with a coat of Testors flat. I then applied a thin black wash to highlight the panel lines and fasteners. I also built Eduard’s AGM-154C Block II set at the same time and I have included a photograph comparing the two weapons.

This is another nice set from Eduard depicting modern air to mud weapons and will look very nice under the wings of a Hornet, Super Hornet, Viper, or Warthog. Recommended

Thank you to Eduard for the sample and to IPMS-USA for letting me review it.