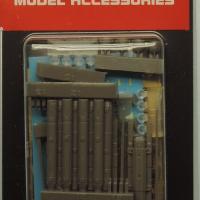 Brengun has produced a set of two racks of AGM-114 Hellfire missiles for any appropriate1/48 scale helicopter or aircraft kit.

The AGM-114 Hellfire (AGM stands for air-to-ground missile) is an air-to-surface missile (ASM) first developed for anti-armor use, but later models were developed for precision drone strikes against other target types and have been used in a number of actions aimed to "destroy high-value targets." It was originally developed under the name Heliborne laser, fire-and-forget missile, which led to the colloquial name "Hellfire" ultimately becoming the missile's formal name. It has multi-mission, multi-target precision-strike ability, and can be launched from multiple air, sea, and ground platforms, including the Predator drone. The Hellfire missile is the primary 100-pound (45 kg) class air-to-ground precision weapon for the armed forces of the United States and many other nations. It has also been fielded on surface platforms in the surface-to-surface and surface-to-air roles*

A close-up evaluation of the parts (see photos) indicates a simple installation that provides realistic scale-detail with significantly improved appearance to molded plastic kit parts. The Brengun missiles have superior detail to those supplied on typical kit manufacturers sprues.

Some cautionary advice: for those without basic modeling experience, use CA (“super-glue”) sparingly, to assemble and/or attach these parts to your plastic kit, as the usual plastic glues do not react with resin parts. Assembly will require heavy magnification, as some of the fin parts are micro-tiny. Full disclosure, I was unable to successfully attach the small fin parts consistently on the first example. After several hours at the workbench, I became frustrated with my inability to successfully grasp the PE parts and find an adhesive that would work for me to attach them. I gave up on completing the remainder of the missile bodies. Those with more experience than I have in working with extremely tiny photoetch parts will have more success. Painting of the parts will be necessary, so check your references, and be sure to prime with the appropriate materials that are compatible with your preferred paints.

Overall, this is an excellent replacement set that will lend increased realism to any 1/48 AGM-114 Hellfire delivery platform aircraft. These sets can be purchased at the Brengun website above.