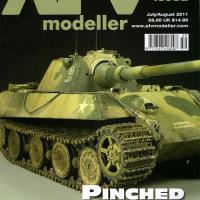 The summer issue of AFV Modeler lives up to its pedigree as a world-class modeling magazine. The cover article is a riff on Luftwaffe ’46. Using what I believe is the Dragon Panther II kit, Miguel Jimenez (MIG products founder) describes his flight of fancy – the Americans and Germans unite at the end of the war to battle the Communist menace using German equipment. The bulk of the article is devoted to giving the tank its marvelous finish. Using color modulation and the hairspray technique, the author gets a fantastic result using advanced finishing techniques.

The next article features Denes Benedick’s diorama. Set in the last days of the 1940 French campaign, the Bronco A13 Mk. II and Adler Kfz. armored car builds a very nice diorama depicting the British First Armored Division on the offensive.

A build review of the Hobby Boss Merkava IV and an accompanying photo essay of the same tank dominate the center of the magazine. In a fairly complete build review of the new Hobby Boss Merkava kit, David Parker includes techniques to correct imperfections in the hull and running gear, as well as shortcuts on assembling the most tedious part of the kit, the balls and chains that hang off of the rear of the turret. The accompanying photo essay of a Merkava in the field is an invaluable resource that captures all of the features of this unique vehicle.

Following the theme of tanks in the Middle East, Vladimir Yashin kitbashes a Syrian Panzer IV used in the 1967 war. Imported from Czechoslovakia in the 1950s, they remained in service through the 60s. Using the Tamiya kit as a base and followed by bits and pieces from a host of other companies, Yashin details some of the steps of modifying the base kit and finishing it.

Continuing the series of photo essays on Sherman tanks, this issue focuses on recover vehicles with a short but complete photo shoot of the bits and pieces found on and in these vehicles.

The editor of the magazine, David Parker, continues his long running series of super-detailing the Trumpeter 1/16 King Tiger. In this installment, he focuses on assembling the radio and dashboard, as well as miscellaneous fittings in the turret and hull. Personally, I found these updates of what is obviously a complicated build to be the highlight of this magazine.

The issue concludes with various kit and product reviews.

As usual, AFV magazine is chock full of information, in particular on finishing a vehicles with complex weathering and paint schemes. My thanks to IPMS and AFV Modeler for giving me the opportunity to review this publication.