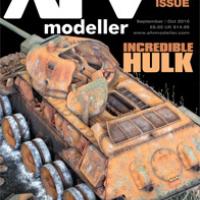 To me, AFV Modeller is one of THE finest armor model magazines on the planet. Issue 54 continues their great tradition of providing the reader with well written articles of superbly built models and dioramas, beautifully photographed and printed on high quality paper, along with a nice sprinkling of informative reviews covering the latest books, kits and model accessories.

This month’s cover article is by Bruno Carsuzaa, detailing the construction and weathering of a Trumpeter 1/16th scale T-34/76 Soviet tank. The kit is built as a knocked out example, one side having burned so that the rubber is missing from the road wheels. The back of the turret has been blown out, and the entire vehicle is beautifully weathered in rust, as part of a diorama depicting a German slit trench. Completing the scene are two German soldiers, by Verlinden and Stormtroopers.

Continuing with the Soviet theme is the second article, by Alexey Sergeyev. This depicts a scene from “Chechnya 1994”, consisting of a Soviet T-80BV main battle tank parked on a muddy base. There are four Soviet troopers aboard the tank, with an additional four troopers next to the vehicle, two of who are “interviewing” a captured Chechen soldier, his arms bound behind his back and sitting cross-legged on the ground, his head wrapped in a bandage. The article gives a brief description of the T-80’s development, and points out that there are no quality kits of any of the T-80 series in injection molded plastic. To produce his T-80BV, Mr. Sergeyev used parts from multiple sources including Skif, DML/Dragon, MasterClub, Modelpoint and Eduard. Along with a ton of scratch building and super detailing! The figures come from Bravo-6, MasterClub and Verlinden, utilizing where appropriate Hornet replacement heads. The quality of these figures is superb, and the author has done a masterful job painting them.

Article three is by Bernhard Lustig, depicting a diorama titled “Kharkov, Spring 1943”. This shows a Panzer III and its crew, together with some German soldiers taking fire while passing a small Russian house. The article describes the process for producing a distressed winter whitewash scheme for the tank, together with the scratch building of the soldiers/tankers, and the house.

Next comes two reference articles, one on the Land Rover WMIK, or Weapon Mount Installation Kits, a way of providing Land Rovers with fire power. The 8 page article, by Richard Stickland, provides the modeler with 27 color photos of variously configured Land Rovers. The second article, another in the “Sherman up Close” series that has been running for a number of issues, covers the Canadian Grizzly. Twenty nine color photos of a working version seen at the MVPA International Convention in 2010, Topeka, Kansas.

Next on the list, another installment of Editor David Parker’s mammoth series on super-detailing Trumpeter’s 1/16th scaled King Tiger. All I can say is “WOW”, what an amazing project. This is an already incredibly detailed kit, given the “Royal Treatment” by a skilled master modeler. The additional detailing is breathtaking. Thirty two up close color photos document this installment, which covers the turret roof interior.

Eight pages of kit, book and model accessory reviews then follow, with this issue concluding on yet another high note, Zack Sex’s masterful build of Vajra’s 1/35th scale Israeli Defense Forces’ Caterpillar D9 Bulldozer. Superbly built, wonderfully weathered, this was a real treat, as you don’t see many military bulldozer models about the place! The author says the kit went together very well, and I for one am very tempted to get one after viewing this excellent article.

My thanks to the publishers of AFV Modeller for supplying IPMS USA with this review sample. I had a wonderful time reading all the articles, and unreservedly give this publication two massive thumbs up! Visit their web site for subscription information or single issue sales