The Aftermath of Dunkirk, Rare Photographs from Wartime Archives 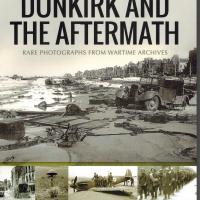 The book is divided into seven chapters with an introduction. The pictures are located between chapters and they pertain to what is explained in the previous chapter. The first chapter talks about Hitler’s decision as to why he halted the German Army and the consequences of this action. The second chapter then moves to the decision of the British to save as many fighting men as they can through Operation Dynamo. The third chapter talks about the POW’S, as well as the massacres at Le Paradis and Wormhoudt. Lost equipment Is addressed in chapter four, and Chapter five deals with the debates conducted in The British Parliament. Chapter Six deals with Dunkirk and the British press. While chapter seven deals with both Operation Cycle and Operation Aerial.

Chapter One not only touches on Hitler’s decision to halt the fighting but the frustration of the troops, as well as the German generals for a decision to stop a battle that would have ended the war with the defeat of both the British and French armies. The final decision was made because Herman Goering promised to finish the battle. He claimed he could defeat the Allied troops by using the Luftwaffe. We all know the outcome of that decision.

The Heroic actions, and I cannot use a better word to describe the actions performed by the British Navy, as well as of all private sailors that sailed into hostile waters to save everyone they could regardless of nationality. The pictures show the discipline of the men on the beaches and that was probably why they could save so many lives.

The third chapter touches on the POW’s as well as the two massacres that took place and were performed by the SS. This chapter was the most interesting one for me as I knew very little of the massacres touched by the chapter. I was very surprise by the outcome of the trials that took place after the war.

Pictures of lost equipment is covered in Chapter Four. Regardless of how many times I have looked at pictures of the equipment left behind, I am still surprised that the recovery of the British army was so fast. You will find pictures of all kinds of equipment anything from just food supplies, to water bottles to heavy equipment. It was really a debacle from which the British recovered very well.

Chapter Five is the chapter that deals with the response of the British Parliament to the debacle. I, personally feel that this chapter, is the weakest one of the book. It tries to get the idea of the importance of the arguments provided by the politicians. I felt that the comments were disjointed and in a certain way out of context.

Dunkirk and The British Press is dealt with in Chapter Six. I have to admit that the British Press made a victory out of defeat by citing many examples of heroism. These examples were not only those made by the uniformed men, but civilians as well. Even though I have read lots of articles about this event, I was surprised with a few new pieces of information.

Operation Cycle and Operation Aerial are addressed in the last chapter. These are the names given to other evacuations that took place across the French harbors and they are interesting as most of us have heard of Operation Dynamo but not of these two operations. Part of this section is devoted to the sinking of the ship Lancastria. I enjoyed this chapter as I learned more about the evacuation of the French forces and BEF.

I found the book very informative and enjoyed the pictures, as well as the text. In addition, I learned new facts about the evacuation of the BEF and French Forces. We all heard and know about Operation Dynamo, but very few of us know that there were other operations to extricate the BEF and French forces from the continent.

My thanks to Casemate Publishers and Pen & Sword for allowing me to review this offering.