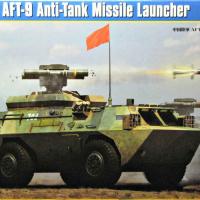 Hobby Boss continues to release new and interesting military subjects from China’s People’s Liberation Army. If you look at their catalog, over the past several years they have released a variety of kits based on armored cars, for example, this kit is similar to the Hobby Boss kit no. 82485, Wheeled Tank Destroyer, though the vehicle for this kit is a later variant. The HJ 9 missile system is paired with a WZ550 APC. It entered service in the 1990s and was first seen in public in the Beijing military parade in 1999. There is a crew of three and can be controlled from inside the vehicle. It appears that it’s still in service and in production.

As with most kits from the Hobby Boss line, the sprues are individually bagged. There are ten sprues in tan plastic, a fret of photoetch, six rubber tires, two small sprues of clear parts and decals for two vehicles for a total of 265 parts. There’s no flash on the pieces and the molding is very good, though I found the plastic to be a tad bit soft. There is a separate sheet with full color exterior call outs in a variety of model paint colors. Hatches can be left open but there is no interior. The missile launcher can either be posed in either a stored or deployed position.

As with most vehicles, assembly begins with the chassis. The bottom and top of the vehicle are split into two pieces. The back is closed with a third piece. The components fit together snuggly. No need for putty here. The towing hooks require two parts, the main hook and a smaller, inset piece (A23). Unfortunately, I lost several of these inset pieces to the carpet monster. That being said, there are a fair number of very small parts, even for a 1/35 kit, so be careful as you remove them from the sprue. The wheel assemblies are straight forward. The springs are molded and attached to brackets that trap the short axles. The axles (part A8) are a chore to install, but with patience, you should be able to seat them correctly. With the assembly of the side and rear hatches, pioneer tools, and various towing hooks and handles, the remaining parts of the kit are assembled on the top side of the vehicle.

Because there is not an interior for this vehicle, I elected to keep all of the hatches closed. As with the bottom half of the kit, assembly is straight forward. There were a couple of things that stand out in the assembly of the bits and pieces that go on the upper hull. The ladder rungs on the left side of the vehicle (B12) have no attachment points so I had to put in some divots to firmly attach the rungs. Similarly, the hatch handles had very shallow attachment points, so I made those a bit deeper so the handles would remain attached. Unfortunately, I lost several of the armored shutters to the carpet monster, so they are not installed. The only thing that I care to comment on concerns the photoetch. I am not the biggest fan of photoetch. Beyond the requisite muffler shields and grates and headlight covers, which are relatively easy to install there are some very small hatch hinges that are, for me, impossible to fold and then attach to the vehicle. In the end, they defeated me, so the hatch covers are sans photoetch. Similarly, the grates that go over the headlights are very fragile and should be handled with care.

The missile launcher is the most prominent part of the vehicle and as stated previously, can assembled in either as deployed or stored. The deployed tubes are dramatic, so I chose to assemble the mast in its upright position. There are two sub-assemblies for the launcher – the box that’s attached to the APC and the missile tubes and sights. The box is easy to assemble and included two pieces of photoetch. The photoetch did not fit very well. Why these were rendered in metal rather than plastic, I am uncertain, perhaps to get scale thickness. Since there are two sets of missile tubes, it’s important to make sure that you assemble them correctly. The tubes attach to the control box. Of all of the missile components, this was the most challenging. It took a fair amount of dry fitting and sanding to make sure each side of the box was square. I still had some thin gaps. Once glued, the missile tubes hang securely to the control box.

As with most Hobby Boss kits, they provide a number of colors to choose from. I use Tamiya paints, but there appears to be a mistake. The base coat of dark yellow (XF-59) appears to be a good match. The camouflage colors are incorrect. The light green is identified as XF-20 in the instructions. As it turns out, that’s Medium Grey. Not a good match. A closer match is NATO Green (XF-67). The darker green, listed in the instructions as Forest Green (XF-58) while a fairly good match, was not as dark as I wanted, so I used Olive Drab (XF-62). A gloss coat of Future was applied to accommodate the decals. Hobby Boss decals go on without a problem, though the instructions for placement are a bit unclear. The box are shows the vehicle numbers going under the pioneer tools on the side of the vehicle. The instructions show otherwise. I think the box art is correct. I finished the model with a dull coat of Testors.

Hobby Boss are usually problem free and easy to assemble. Though this kit has some small, fiddly parts, it’s a relative ease to put together. Even though Chinese subjects are probably not popular with North American modelers, I find it refreshing to see model companies going in new directions. My thanks to IPMS, Squadron MMD and Hobby Boss for giving me the opportunity to review this kit.