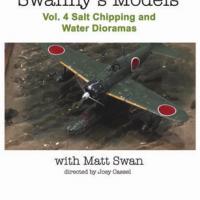 Matt Swan keeps providing us with more modeling blessing on the 4th installment of his instructional series. The scope of this set is water dioramas and salt chipping technique. The subject is a 1/48 Tamiya Rufe and a nice beach scene, including everything you can imagine, even scale fish in the water!

Towards the end of his 3rd set, Matt shows how to build some simple bases to display your model. This time he goes into town showing step-by-step how to create a base, a sandy beach, foliage and more importantly: water. That is not all, as he will build a Japanese float-plane and show how to replicate paint chips using the ‘salt chipping’ technique.

The video moves back and forth between the diorama and the airplane; which replicates what would occur in real life, as any modeler would likely work on both a diorama and the subject in parallel.

The model construction serves as a ‘refresher’ on best modeling practices, although it will not spend much time on ‘the basics’. It will still cover them, but not dwell long on them. A nice touch is to show how to recreate the elusive ‘aotake’ (blue-green Japanese interior cockpit color) using Alclad paints.

Most of the model construction is devoted to finishing and how to recreate the paint chips effect with salt. It covers everything, from the different salt types that you can use, to how to apply the salt, how to fix problems and mistakes and how to remove and ‘blend-in’ the chips in the paint. It includes a few ‘lessons learned’ tricks, like how to go about masking around the yellow tactical identification and re-apply salt to maintain the overall ‘chip pattern’ across different camouflage colors.

The diorama construction literally shows every single step along the way, with ample detail and even heads up on potential problems. You get to see how to build a frame out of wood, how to stained it and how to seal it. The next steps cover how to lay foam and colored celluclay to crate the terrain and cover it with different materials to develop texture. It also shows how to create scale foliage on the beach out of plastic plants he picked up at a home décor store.

The water build up is shown in great detail. In order to create the illusion of depth, clear resin is tinted and Matt shows how to do it. Then there are two more resin pours, one of which includes scale fish and how to position and anchor the model into the water. Finally, after the last clear resin is poured, the DVD finishes with a demonstration on how to create waves in the water.

Perhaps the most important part of the diorama construction is that Matt describes his though process on when, where and how to put detail. Stuff is not just ‘thrown in’ around the diorama. Matt talks things like ‘fish tends to be in groups, they like to be under the shade of a wing or around a float’, and he positions the fish accordingly. Plenty of other details like this are described both in the diorama and aircraft finishing.

As with the previous DVD sets, whenever a mistake or problem happens it is not edited out, but actually kept in the set and it shows how to fix and recover from it. That is high instructional value.

I would recommend this DVD set to modelers of any skill level, except for the absolute beginner.

Here is the link to the DVD trailer: https://www.youtube.com/watch?v=vAHd6wwmoQY

Review sample courtesy of my own pocket. I was lucky enough to have Matt send me the 1st production set autographed, which I honestly appreciate and am grateful for.

Sample still from DVD
Previous Next