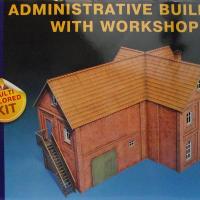 This kit is pretty similar to my last review of the MiniArt buildings; most of the parts are the same injection molded plastics. However, the parts in this kit are molded in brick red, black, white, blaze orange, and gray. All parts are mostly free of flash, with the small exception of a minor piece of flash next to every one of the connecting blocks, which, if left untrimmed, will skew the walls during assembly. I approached this one with some trepidation, as it is much larger (233 parts). However, in the end it was not nearly as bad as I thought it would be.

Construction was pretty straightforward, much like the kit I did previously. Wall sections are mated together into sub-assemblies, then larger sub-assemblies, until finally being put together into the finished product. Everything went together fairly smooth, but the omission of one piece slowed up progress. Lucky for me, there were enough spare parts for me to cobble together a makeshift part to complete the review. After trimming the flash mentioned above, I was pretty surprised at the amount of progress being made. However, this kit is not without difficulties. The corner pieces are very fiddly and seem to want to slide together at an acute angle, which will wreak havoc with your build. Additionally, the roof sections are very fiddly. The inside structure of the building has several reinforcing sticks and a very large amount of CA keeping it all together. If you approach the build properly, it isn’t much more than an added step or two. Lastly, I was forced to omit the stairway from the building as every stair that I clipped from the sprue snapped in half. I will eventually fix this, but I did not want to take that time. Using a #11 blade or snippers ended with the same result, so take care when on this step.

All in all, again I found this build pretty much a fun one. This and the Goods Shed from the previous review were the first buildings I have ever built. Thanks to these, I will do more. I was able to do further experimenting with weathering techniques and, aside from the very minor issues that I have mentioned above, I was able to push it out in a week’s time. Adding the cross braces to the walls greatly increased its strength. I hope everyone enjoys the review, and thanks to Model Rectifier Corporation for supplying the kit and IPMS-USA for offering the opportunity to review it.

More precise details regarding the era/s of Miniart buildings

Thanks for your review of Miniart's 1/72 Administrative Building with Workshop. I have purchased some of their other kits like this, for use in dioramas. I have not been able to find any specific details on the Miniart website about what specific time period/s their buildings are for. Nor are those types of details included on the box or instruction sheet (unless I missed them, somehow). I am not an expert on European architecture, but some of Miniart's buildings are obviously too modern for the Seven Years' War and Napoleonic periods (for which I collect 1/72 figures), and seem more suitable for the late 19th century and up until about the 1950s. Are you, or any of your fellow modellers, able to provide a more definitve answer, in relation to the right era for most of the Miniart city buildings, country houses, etc.?