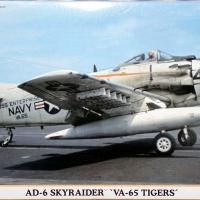 Good news – Hasegawa has re-issued its Skyraider kit, too long absent from the hobby store shelves. Their first boxing comes with decals for an aircraft of VA-65 from the USS Enterprise – featured on the box art – plus optional markings for the CAG aircraft of VA-165 aboard the USS Oriskany. You’ll see two models in an accompanying photo, but note there’s only one model in the box – I thought it’d be a nice comparison to show off the alternate decal markings provided in the kit by building a second A-1, pulled from my kit stash. There’s only one set of common markings in the kit (insignia, wing walks, instrument panel, etc.) so I used these items from the second kit’s sheet.

Comparing the sprues, the re-issue is identical to the first release I built when this nice kit first appeared on the market many years ago. The clear parts are packed in their own separate poly bag to prevent scratching them.

Construction of the gray plastic parts is straightforward with no tricks; however, the antennae on the belly and the fuselage spine would make it difficult to sand the fuselage center seam, so I cut all the small ones off, leaving only the ADF loop housings in place. The A-1’s fuselage has a flat belly aft of the wing, and the kit has some fit problems here; when the fuselage halves are assembled, this area is concave and requires a good deal of filling and sanding.

The engine has a separate nose case, and though it only has a single row of cylinders instead of two, it’s a pretty good cosmetic representation of the big Wright R-3350. But if part A5, the “nose cowl flaps”, is installed, the engine won’t be visible, since these flaps are molded closed. In service, the nose flaps began to close when the regular (trailing) cowl flaps were fully closed and the cockpit switch continued to be held in the “close” position. Since they weren’t visible to the pilot, a rod extended out of the cowling to give him an indication of how far they’d closed down. Unless it was really cold inflight, or the aircraft was secured on the ground, the nose flaps were rarely closed on operational A-1s. I omitted part A5 on both models.

The fuselages of both aircraft were slightly narrow at the wing root area, resulting in gaps between the body and upper wings. My solution was to wedge a piece of thick styrene strip inside the fuselages to spread the sides a bit – that fixed the problem pretty well. While I was there, I also added a sheet plastic tab inside the aft part of the opening to anchor the wing trailing edge more solidly.

Three Aero 1A drop tanks are provided in the kit, two finned ones for the inboard wing stations and a bobtail one for the centerline rack. Armament consists of four CBU “pipe organs” or “water heaters” for the outboard wing racks…I left these off my models.

The Aeroproducts props have raised detail on their tips, presumably to aid in locating the prop tip color lines, but I sanded them off and painted my prop tips instead, except for the red stripes, where I used red decal trim film. The decal sheet gives both front face and rear blade face decals.

Painting instructions point up a couple of interesting items. The VA-65 aircraft, termed an AD-6 on the box art, has been redesignated an A-1H, while the alternate VA-165 aircraft is from a slightly earlier time – before the Common Service Designators were implemented – so it IS “officially” an AD-6. The decals are correct for both, even though the box art nomenclature’s a little off.

The anti-collision beacon atop the vertical fin on the VA-65 aircraft isn’t correct and should be removed – see the box art for confirmation of this. This feature was a retrofit under an ASC (Aircraft Service Change) and came about on a per-aircraft basis as they went through either Rework or Overhaul & Repair. The VA-65 aircraft, even though it depicts a more recent period, hasn’t had this modification performed yet.

The VA-165 aircraft, on the other hand, hasn’t been redesignated A-1H, but has that beacon. Moreover, it still has a gray rudder, white ones being directed by the new paint specs of 27 Dec. 1961. Modifications just hadn’t caught up with this aircraft at the time period depicted.

Upper views of both aircraft in the painting instructions are a little off. Only the horizontal control surfaces were painted white, but the drawings show the ailerons AND the panels ahead of them to be white.

I was a little disappointed in the decals. They’re the first matte-finished ones I’ve ever come across in a Hasegawa kit, and some of the colors seemed washed-out. The photo of the two cockpit tubs show that the ‘old’ kit’s instrument panel decals on the right were black but this new release has dark gray ones instead. The Rescue arrows were likewise washed-out, and the National Insignia had a lighter-than-insignia-blue shade – I substituted some aftermarket decals for the stars and bars.

I’d thought that the decals’ matte finish and the goodly amount of visible clear carrier film after decal application might look really bad, but a gloss overcoat to seal them in place, followed by a dullcoat finish, was all that was needed to make them look OK.

After the models were completed, I added sheet-plastic antennae to the fuselages to replace those I’d removed in the building process. Masking tape seat belts and stretched-sprue ADF sense antennae were the only things I really added to the models.

I haven’t flown the Skyraider in 47 years, but she still holds a fondness for me; Hasegawa’s is the A-1 kit to build in 1/72 scale, and with its recessed panel lines and faithful capturing of the fuselage armor plating and other details, it holds its own with today’s kits.

Many thanks to Hasegawa for making the kit, Hobbico for supplying the kit, and IPMS/USA for the opportunity and privilege of allowing me to build this nice kit. It provided me with some fond memories.