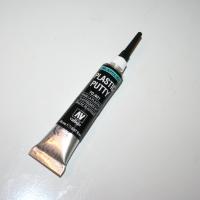 Vallejo’s name is well recognized in the scale modeling field. They have a huge array of products, and their specialized modeling products line is one of the best in the world. At our last IPMS Chapter meeting, Keith Pieper of Avalon Books gave me a tube of Vallejo’s new white Plastic Putty.

The putty itself is an acrylic medium with white color and marble dust. The added marble dust makes the putty more durable than most.

The tube is fairly small, 20 ml., but with the fine applicator “spout”, it goes pretty much where I put it, so I have less waste of putty when I’m doing a seam. The first time I tried it, I put the putty on the cab of an Italeri Opel Blitz ambulance in 1/72, which needed a pretty good fill between the hood and the doors of the cab. After I let it set up overnight, I sanded the seam, and it worked pretty well. Because it’s white, it made painting easier, the color covered better than they would red or white putty. No primer required.

The second model I used it on was an A Model 1/144 Lancaster. I did a conversion from the “Dam Buster” to the “Grand Slam” carrier, and I needed to cover over the front turret and fair it in. I also had to deal with poor fit between the engine nacelles and the bottom of the wing. The poor fit part is relative. The “huge” gap between the nacelle and the wing was about ½ mm.

The front turret was pretty much a standard job. Put the filler in, try to shape it a little to reduce later work, and let the putty set up. I ran into a problem here, as the putty didn’t necessarily want to stay put when I tried to do some shaping before the putty set. I wound up pushing the putty back in place as well as I could and letting it set up completely before fooling with it again.

Then I made one of those “AHA” discoveries. When I went to work with the nacelle gaps, the putty was in the seam, with some sticking out. I used a #11 blade to cut the partially set putty down to level with the side of the nacelle. I then used the blade to remove the excess on the wing surface. This was so fast and easy, and I was really pleased.

When the nose filler was completely set the next day, I used sanding sticks to get the excess putty off, and I was fine with this part too.

The last model I used the putty on was Zvezda’s 1/144 Hs-126, a snap-tite kit. The fit was OK on the kit, but the part where the wheel assembly went into the fuselage fit poorly. I put some filler in the seam, and had another idea. I used a damp (not wet) Q-tip to level the excess putty. I worked around the edges first to get rid of the overlap, then ran over the seam a couple of times to level it.

The Q-tip method worked pretty well. There’s minimal shrinkage in the putty as it dries, so the whole filling and leveling process took about 10 minutes.

This is darned good stuff. It’s not super cheap, but I’m going to buy a new tube when this one runs out, probably sometime in 2019. It can be used for just about any filling job, and the applicator makes it great for tiny holes and seams.

Thanks to Avalon Hobbies for providing this great product, and IPMS USA for the chance to review it.