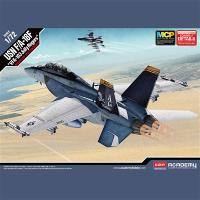 One of the latest offerings from Academy is their new tooling of a Super Hornet in 1/72 scale. Academy is known for well-designed and sharp tooling, and this kit is no exception.

The kit comes molded in 3 colors: gray, white and black. The gray parts include most of the airframe and other parts. The black parts include the vertical stabilizer, burner cans, tires, seat and instrument panels. Don't fret over the black verticals, however, as they are included in gray as well. The white sprue includes intakes, main gear wheel hubs and landing gear struts.

The first few photos of assembly I have included (the unpainted kit) show the kit in an almost complete fashion without using a drop of glue anywhere. I was very tempted at this point to simply slap the stickers on and call it complete, but I pressed forward to actually build the kit as most modelers would.

The fit is good and very minimal sanding was required. When I took the model apart, some of the pieces we so snugly fitted that I feared breaking a few parts, and I did. The canopy hinge covers were cracked when I was carefully (or so I thought) taking the canopy off. I was able to use some jewelers watch crystal cement to hold them into place until I reattached it later. The cockpit is a little basic, but the decals provided added an appropriate level of authenticity for the out-of-the-box builders and the super detailers would likely replace the office with a resin one anyway.

As a sidebar, I would like to note that over the course of building this, I somehow misplaced the decal instructions. I contacted MRC and got a replacement set as a PDF. The lady who sent these to me included this note:

"For your reference and future building needs most instructions are on Academy’s website in the “DATA ROOM”." - which can be found at: http://academy.co.kr/eng/6q/frmBoardList.asp?pMenuId=BOARD00014

It took some searching on their site map, but it exists and is very helpful.

Pros: The kit is simple enough for younger/inexperienced builders to have a good time building it, while having good scribing and detail to satisfy the experienced builder. The fit is excellent with minimal sanding. The decal sheet is very extensive with plenty of tiny details to drive the average builder crazy putting the hundred-plus decals on. The radome and canopy are molded in single pieces to ease assembly and reduce fit problems, but it prevents the opening of said items.

Cons: as mentioned, the canopy hinges are a bit brittle. The main landing gear seems to snap into place perfectly, yet the plane as a little bit of a lean when one does that. Adjusting the gear is difficult because of this tight fit. The weapons are very nicely done, but are over parted, in my opinion, and their attach points are huge! The weapons pylons have huge pins to snap the weapons onto as well. This allows the model to have "playability" for kids, but detracts from the experience of this experienced builder.

Overall, I enjoyed building this kit very much, and another might be the basis for more Super Bugs if they change up the decals to include markings that appeal to me.

I would like to thank Academy and MRC for the opportunity to build this kit for them.