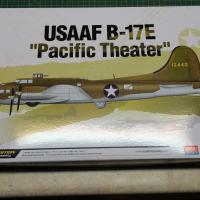 I won’t go into too much detail on the B17E because its been covered extensively with all the other B17 kits out there. It started the war headed right into the middle of the attack on Pearl Harbor on Dec. 7, 1941. The B17s were not armed so they had no way to fight back. They had to land because they were low on fuel. Some were destroyed some damaged and a couple escaped with little damage. From that point on the B17 was the only big bomber in the pacific that was used for the first year and did what it could to slow the Japanese onslaught. It’s amazing that they could accomplish anything with the limited men and materials available during the early part of the Pacific war, not to mention the horrible conditions they had to work in.

Academy has finally come out with a re-pop of the 1/72 B17E in Pacific Theater markings. This kit is the same as the original that was in RAF coastal command colors. Academy must have kept the molds in good shape because there was no flash and minimal sink marks on the grey styrene parts trees. Everything looked very good considering the age of the molds. The new kit comes with 4 different decal sets, 3 U.S., 41-2440 “Calamity Jane”, 41-2458 “Yankee Diddler”, 41-9227 “ Yankee Doodle Jr” and one captured B17E in Japanese markings.

The instructions are fairly simple and easy to follow as you start the build with the cockpit and bombardier/navigators area. The interior is somewhat sparse but there is a lot of aftermarket parts available for the Academy kit. The Bombardiers control box is marked as part A77 and should be B77. The Navigators table and chair are basic. Next is the bomb bay area which is somewhat accurate with the cat walk and bomb racks with 8 bombs available for the racks. The top turret and ball turret are put together next. The top turret is pretty simple with the twin .50s but nothing else. The ball turret is molded clear and comes in two parts with some decent detail. The two fuselage halves are next and painted the appropriate green and aluminum, and all the interior parts are installed and everything goes together well. The clear window parts for the small windows I did not install in this step. I will put clear glue windows in later. The wings and landing gear are assembled next and everything lines up well. The next step installs the exhaust, turbo-superchargers, tires, and clear landing light lens on the wings, but I recommend waiting until the end for painting purposes. The two clear tail gun parts and guns go together next. I’m not crazy about the way they designed the two halves because the seam goes right through the middle of the rear window and there is no way to eliminate the seam once glued. I think Academy should have made the windows separate pieces for the tail gun compartment. Next are the engines, cowls and props. The engines are pretty basic looking 1820s but once painted and inside the cowls they look ok. There are aftermarket engines and cowls available that look very good. The props that are called for, K18, are incorrect for the B17E, part B13 should be used instead. The original props were thinner than the later props used on F&Gs. The originals were called “toothpick” blades and the later are wider and called “paddle” blades.

The final assembly includes the wings, horizontals, tail gun, nose cone, fuselage, Cockpit and radio room glass, engines and cowls, and bomb bay doors. The only problem with the assembly are the wings. I don’t know where Academy got their plans from, but the dihedral of the wings are too steep. I had to sand down the bottom edge of both the wing and the fuselage and then put a .010” shim on the top side and got the dihedral back down where it should be. Once everything is glued and sanded all glass is masked and prepped for paint. Most B17Es were painted with dark olive drab topside and neutral gray on the bottom. The instructions call out olive drab FS34087 but it should be FS34086. Once paint is on and dry, the decals started going on over a Future base. The kit decals are by Cartograf and go on fairly well. The only problem is they are a little on the thick side and don’t seem to settle into the seams very well, even when using the red Solvaset decal set. The decals have all the stencils needed but the letters are so small in 1/72nd scale that they almost disappear on the green drab. The stars for this B17 does not have the red dot in the center and all of the early B17Es had the red meatball in the center of the star, so I sprayed the red dot myself. Once done I did a little weathering and a coat of flat clear finish. I then added some antennae, put the tires on, added the props and put the rest of the guns in.

So to wrap it all up the kit was easy to put together and the fit and finish was OK with minimal issues. Once built it’s a good looking B17. The only issue I have with the kit was the dihedral of the wings, which can be fixed, and the other problem is this B17E had a remote turret and the kit only has the manned sperry ball turret, which most people probably would not know. If you wanted to make it correct you would have to scratch build the turret and glass bubble for the sight.

Thanks to MRC, Academy and IPMS for the opportunity to build this kit.