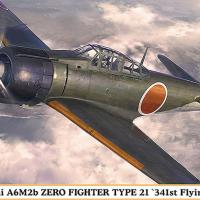 Hasegawa has re-boxed their well-known A6M2b in 1/48 scale. Despite being an “old” mold (at least 10-yr, if not a bit more), the parts still hold really well, with no flash anywhere, petite and fine details, recessed panel lines and perfectly molded parts.

Construction, as usual begins with the cockpit. The only thing I decided to add was to drill the lightening holes in the seat and to add a pair of Eduard IJN steel seatbelts to it. The rest of the cockpit is straight out of the box, down to the decal used for the instrument panel. I was impressed by how good it looks when completed.

I then assembled the wings - which presented no issues at all - and when dry-fitting the wings to the fuselage, the fit was pretty good. There have been reports of the bottom wing to bottom fuselage having a step. I did not have any step, just a very small gap. I don’t know if the lack of a step was due to my departure from instructions regarding the cockpit or not. In any case, I was very happy to only have a small gap to fill and sand.

The rest of the assembly went together extremely easy. I only had to use some putty on the tiny gap between the lower wing and fuselage and in the air intake just behind the engine, also in the lower part of the model.

Painting was accomplished with Model Master enamels. Very smart engineering means that you can actually paint the engine cowling and then assemble, which simplifies the masking job even further.

Decals were typical of recent Hasegawa releases; good color density, the white being white (not ivory), a bit thick and slightly prone to silver, and to not truly conform to the panel lines. I applied MicroSol/Set and it helped, but I had to go with an X11 knife over a few spots, and then apply MicroSol/Set again.

After assembling the landing gear (again, perfect fit), I applied an acrylic wash, and later a flat coat, and the model was completed.

I am very pleased with the final result. This model has a relatively low part count (60 to 70), it has really good fit, and despite a minor gap and some slightly thick decals, it looks great in my display cabinet.

This is a great model for a returning modelers (maybe a late teenager too) and a great break for the seasoned modeler that wants a relaxing build. Just beware that the decals might silver a bit.

Excellent model and well worthwhile for the fun and satisfaction value. Recommended.

I would like to thank Hasegawa USA and IPMS/USA for the review sample.

Rear wing joint that required a small amount of putty

Completed aircraft with base coat applied