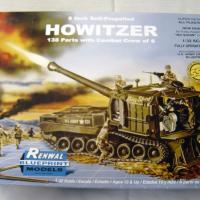 Editor's note: This kit is a re-release of the Renwal kit of the late '50's. It set a standard in its day.

Right after WWII the US Army looked hard at its experience and decided it wanted most of its artillery to be armored and provided with overhead protection for future combat.

Designated the M55 by the United States Army, the 8 Inch Self-Propelled Howitzer was largely deployed in NATO areas during the Cold War and was used extensively during the Vietnam War by US forces. Manufactured by the Pacific Car and Foundry Co.® the M55 weighed 44 tons, carried a crew of six and had a top speed of 30 mph. The M55 was originally based on the M53 155mm self-propelled gun but was rearmed with an 8 inch 203mm Howitzer and used components from the M48 Patton tank. The M55 carried 10 rounds of ammunition when fully combat loaded and the 8 inch 203mm Howitzer was capable of firing rounds up to eleven miles. Although the M55 provided adequate fire support to US forces the vehicle was ultimately retired by the US Army but still remains in use today by some militaries around the world.

This is a re-issue of the old 1950's Renwal kit, Revell-Monogram bought Renwal’s armor molds and they began re-releasing some of the kits in their SSP line. Renwal kits were the premium kits of their day and this one looks like it was last released in 1982 according to the date on the bottom of the hull.

The quality of the molded parts is not bad for a kit of this age. There are a lot of ejector pin marks you will have to fill in and seams you will have to sand down, but for the most part it’s a nice kit. The vinyl tracks have pin marks about every 4thlink that will need to be filled in. The door hinges are really bad; Revell should at least retool those.

This is no super accurate military miniature version of this machine, and there are a lot of concessions to accuracy for the sake of robust parts, hinges, and other moveable parts. If you really wanted to take it up a notch, you could invest a lot of time converting it into a nicer representation, but be ready for some work.

Then you add the Hull top, at this point half the kit is done.

The instructions tell you to add the tracks next, but I recommend you add them after the main coat of paint has been applied. There are a lots of pin marks on the tracks, so lots puttying here to clean them up. The tracks fit perfectly and with a little superglue seal up nice.

Next came the turret and main gun assembly, nothing fancy here. You will have to putty the seams on the main gun.

Once you have all the parts done on the inside you can paint it, then you’re ready to seal it up by adding the turret top.

The top goes on and fits in place, but you will have to putty the seams and file down a few areas to get everything even. Make sure you test fit first so you know where to put the clamps.

I did the interior in Tamiya flat white XF2. The hull and rest of the parts were done with Tamiya olive drab XF62.

Next came a layer of future, then applied the decals and sealed them with a layer of clear gloss coat.

The tracks were sprayed with Mr Surfacer 1000 and then a coat of flat black.

The decals were thin and went on with no trouble.

After the gloss coat dried it’s was time for a light wash with lamp black oil.

The rest of the weathering was done with pastels and dry brushing highlights.

Overall this kit was fun to build, the instructions were simple and the parts fit together nicely for the age of this kit. Yes you will have to use your puttying skills on her but that’s part of the fun and keeps you sharp.

I recommend this kit for all skill levels.

I would like to thank Revell and IPMS/USA for the opportunity to conduct this review.