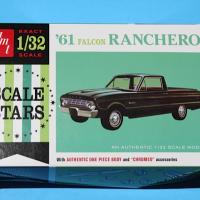 The Ford Ranchero is a coupe utility that was produced by Ford between 1957 and 1979. Unlike a pickup truck, the Ranchero was adapted from a two-door station wagon platform that integrated the cab and cargo bed into the body. A total of 508,355 units were produced during the model's production run.

The kit is produced by Round 2 Models, a well-known company who bought the AMT Line and is re-issuing the kits in very colorful packaging. The box artwork shows a close up of a black 1961 Falcon Ranchero on a classic green background.

The kit consists of approximately 22 parts and comes on 2 white sprues, 1 chrome sprue, and one clear sprue. The parts are nicely molded and there is a minimal amount of flash. All panel lines are raised and all the sprues have large gates. The 2-page instruction sheet shows the suggested assembly of the interior through 4 steps and then installing it in the one piece body. Next comes mating the body to the chassis. Then installing the wheels and front and rear bumpers and taillights. There is no engine provided in this kit.

I chose to build the stock 1961 Falcon Ranchero as suggested by the instructions. The interior is very basic with the seats and interior door panels molded as one piece. The dashboard is also provided as a one-piece unit and fits very nicely with the steering wheel and column sliding into the hole provided. The windows for the front and back come as one piece and slide right in the interior of the body, fitting exactly. Next the assembled interior is installed into the body and fits with no problems. I assembled the wheels and fitted them to the one-piece chassis. Then mated the chassis to the body also with no problems. Next came the chrome bumpers and taillights. There was no engine provided with this kit.

I painted the interior and exterior of the 61 Falcon Ranchero with Model Master Diamond Green. I left the chrome parts as chrome. I highlighted the steering wheel and dashboard with Tamiya Silver.

There are decals provided for some pinstripping if you so desire. But I did not use them on this build and they are not mentioned in the instructions.

Overall the kit is a joy to build and builds into a handsome 1961 Falcon Ranchero! If you want an easy weekend build this is the kit.