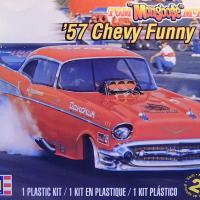 This is a very nice kit. Simple enough to be the first ‘glued’ kit for someone moving up from snap-kits, but also a well-made kit that more experienced modelers can build into a great scale model. The kit’s one-piece body and one-piece frame are both very nicely molded parts.

Tom “Mongoose” McEwen is a drag racer best known for is legendary races against Don “The Snake” Prudhomme. McEwen’s “Mongoose” moniker even was a reference to Prudhomme’s “The Snake”. In 1968 McEwen introduced a new funny car based on the iconic ’57 Chevy. With runs of less than 6 seconds, this car laid claim to being the fastest ’57 Chevy in the world.

Kit comes on three white plastic sprues, a one-piece tubular frame, and a one-piece body. The parts have good detail and only minor areas of flesh. The one-piece frame is particularly nice with very little flash. The one-piece assembly will speed up construction considerably. The body is also nicely molded, with only very minor mold seams across the trunk and across the front of the hood. The body does not have the typical mold seems running down the top of the fenders like many other car kits. The interior shroud and the car body both have copyright dates of 1989.

The kit also includes two chrome plated plastic sprues that have a very good chrome finish. Big chrome pieces have very good detail and the chrome plating is not too thick. Some of the better chrome that I've seen from Revell.

The kit also includes a clear plastic sprue that is very clear and has good detail for the windows. Also included are rubber tires, decal sheet, and instructions. Decals are provided for the chrome body side moldings, chrome trim on the rear fins, and the front grille. A decal is also provided for the rear window, as would have been used on the original car. The decals have a copyright date of 2014.

Instructions are provided in Revell’s typical 8.5 x 11 stapled booklet with 12 pages and 13 steps, including panting and decal placement. Instructions include a brief history of Tom McEwan's 57 Chevy funny car, generic paint colors, and a list of part numbers and names which is very handy. Assembly diagrams are exploded view type and include detailed paint color callouts.

Assembly begins with the engine, which is straightforward and has good detail. The air intake for the blower has an unfortunate mold seam on each side and a sinkhole on the top that will require patching. I filled it with putty, sanded smooth, and repainted the air scoop with Alclad chrome. The exhaust headers in step 2 need to be aligned carefully so they were equal on each side of the engine. I had to remove one of the headers after the engine was installed in the chassis to get them aligned correctly. It would be better to hold off assembly of the headers until the engine is in the chassis so that the bottom of the exhaust pipes are the same distance off the ground.

The next steps are assembling the frame and suspension pieces. The one-piece frame is a very nicely cast assembly with good detail and very little flash. I assembled most of the frame attachments like the frame members for the rear differential and the top of the rollbar cage, and then painted the entire frame semi-gloss black as called out by the instructions. Other parts such as the rear axle and differential, seat, and fire extinguisher bottles were all painted prior to assembly. The front axles, parts 42, should be installed on a jig to make sure they align with the rear axles so all four wheels are on the ground when completed.

Step 7 installs the engine and the chrome side panels for the driver’s compartment into the chassis.

Step 8 installs the fuel piping and pump, and hoses for the engine. The chassis and engine looked good enough that I decided to add some wiring for the ignition and fuel pump, and piping for the oil filters. The engine, fuel tank, electronics box, and oil filters all lend themselves to additional wiring and plumbing.

At this point I jumped ahead to prepare the body, interior shroud, and rear spoiler for painting.

Step 9 installs the wheelie bars on the rear of the chassis. They end up being fairly flimsy so it would be better to wait until after the chassis is complete to install the bars. In step 10 the inner and outer halves of the wheels for the rear drag slicks seem to be too thick for the tire. As suggested by the instructions, I sanded the treads of the tires to give them a slightly worn appearance. Both the front and rear tires snap nicely onto the axles.

Step 11 assembles the various exterior components of the body. The front bumper is shown to be painted aluminum, but I used Alclad chrome instead.

The last step 13 is final painting and installation of the decals. The decals take a while to come off the backing paper and are fairly thick. Decals are used for the front grill, side molding, and even the rear window as would have been done for the actual funny car. Several of the decals like number 22, 21, and 18 are all one long strip rather than individual decals. This simplifies installation but leaves long strips of the decal film. The decals do not respond very well to solvent setting solution, which it makes it difficult to install them on curved surfaces like the headlights and rear window. The decals for the chrome trim around the windows didn’t fit or settle down very well so I left them off.

A nice kit for beginners and more advanced modelers alike. It goes together well into a nice representation of the McEwen funny car. The engine and accessories are set up nicely to allow additional wiring and plumbing detail. The thick decals are the only disappointment with the kit.

Thanks Revell for producing another excellent car model and providing the review sample to IPMS USA. As usual, thanks to Dave & Dick for allowing me to review the kit.