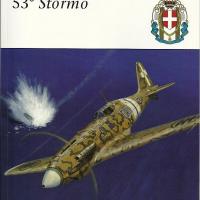 Given the tactical organization of the Regia Aeronautica during World War II, this book covers the story of all the different Gruppi that were part of the 53 Stormo during World War II. The Regia Aeronautica organized their units in the basis of a Squadriglia, (Squadron) with strength of 9 to 12 airplanes. Two or three Squadriglie would form a Gruppo (Group) and two or three Gruppi would form a Storm (Wing). Often there would be autonomous Gruppi and sometimes even Squadriglie assigned to different front or sector.

The Gruppi described in this book are the 150 Gruppo “Gigi Tre Osei”, 151 Gruppo “Asso di Spade”and 153 Gruppo “Asso di Bastoni”. Also 157 Gruppo was attached to 53 Stormo briefly and therefore included in the book.

During its lifetime, 53 Stormo had a very interesting (and colorful!) inventory of aircraft, like Fiat Cr.32, Fiat Cr. 42, Fiat G.50, Macchi C.200, Macchi C.202 and Messerschmitt Bf 109F/G. There are plenty of historical pictures in the book, including 4 rare color pictures. All of them, plus the beautiful color profiles are a great reference for the modeler.

For history-oriented readers, the book describes the involvement of different Gruppi from 53 Stormo in the Battle of France, Greece and the Balkans, North Africa, the Central Mediterranean (Malta and Pedestal and Sicily), plus Home Defense roles. It includes very detailed descriptions of the Squadriglie and Gruppi movements and actions, often including tail numbers/pilot names of the aircraft involved in combat whenever possible.