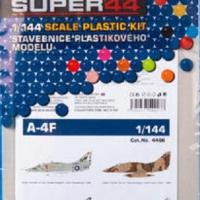 Eduard has added to it's line of Super 44 aircraft model kits with a 'new boxing' of an 1/144th scale A-4 F Skyhawk. This re-release of the Platz kit from 2009 comes in a bag with the addition of photo-etch, a decal sheet with markings for four aircraft, and wheel and canopy self-adhesive masks. Alert readers may remember an earlier review (Academy's B-1B) and my inability to remember where I had stashed the canopy masks for that kit. Hopefully that won't be a problem here.

Link to separate IPMS Review of the SAC set.

The pre-painted photo-etch stuff is mostly bits for the cockpit (seat belts, ejection handles, cockpit tub, instrument panel, etc.) but there are also some small detail parts (wheel wells, launch bridle hooks, etc.) for the Skyhawk. Those wheel wells are a godsend as the plastic parts have zero in the way of molded detail.

The marking options are for four aircraft:

The original boxing of this kit from Platz had two complete kits in the box, Eduard's release has just one complete kit. (Platz's seems to have supplied the plastic bits with Eduard the photo-etch, masks, and new decals.) Don't despair if you are unfamiliar with Platz model kits. The plastic parts for this 1/144th scale Skyhawk are beautifully molded with lots of detail and appropriately petite, engraved panel lines. The Eduard supplied items are as you would expect...excellent!

[Shameless Plug: Brengun, another Czech Republic company, has a number of accessory items (boarding ladder, vacuform canopy, tow bar, and pilot figures) that will go nicely with this kit.]

The kit goes together without much tussle. If you utilize the photo-etch it will require some deviations from the prescribed kit assembly instructions. If you decide to use the photo-etch set reading both sets on instructions thoroughly will be time well spent. One example being the photo etch cockpit enhancements. These will need to be completed before you close up the fuselage. The regular assembly instructions would have you insert the pilot seat into the assembled fuselage. Not being a Zen Master, I opted to cheery pick the photo-etch bits and only used the seat belts, various ejection handles, and 'D' ring. While all of the cockpit PE bits are beautifully detailed most will be almost invisible without an open canopy.

The assembly instructions have you open up mounting holes on the lower wing for five hard points and the main landing gear. The supplied under wings stores are limited to fuel tanks, so I opted to open only those openings. The under wing fuel tanks have a nasty sink hole in the tail fin section. It is nothing that some putty won't fix and is the only flaw in an otherwise beautifully molded kit.

The pylons are molded with one half of the split wing tanks. Be careful with mounting these bits on your model as the connection between the pylon and tank is pretty malleable. The plastic parts do include additional wing pylons should you choose to use some of those spare parts you've been hoarding. The clear canopy is a single piece, so opening up the 'office' may require some crafty modeling skills or the use of the aforementioned vacuformed canopy from Brengun.

The re-fueling probe is provided in its straight form but with some judicious scoring and bending (outlined in the assembly instructions) you can have a bent refueling probe. Check your references for the one that is appropriate to the specific aircraft your building.

The gear doors are provided as single pieces which will make an in-flight model that much easier. Otherwise, you get to separate the gear doors at the well defined panel lines for that gear down look. One thing not covered in the assembly instructions is the disposition on the forward gear door. This is also a two piece affair. The assembly instructions only show the position of the main portion of the forward gear door.

I chose markings for an A-4F assigned to VA-22 “Fighting Redcocks” aboard the USS Bon Homme Richard in 1970. Mostly because I liked the fin flash. I had zero trouble with any of the decals.

This is a lovely kit of an important aircraft and, for me, in the right scale. Eduard is to congratulated for re-issuing this kit with all the extra added details. Now if I can just find that 'safe place' where I keep stashing those self-adhesive masks?

My thanks to Eduard, Scale Aircraft Conversions, and IPMS/USA for the review copy.