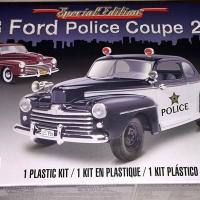 The 1948 Ford was the final year for a new design that began in 1941 with a completely updated, wider and more modern looking car. Shortly after the new car was introduced in 1941 however, Ford had to convert its factories to war production. It wasn't until 1946 that car production resumed. The Coupe came in 3 trim levels, this '48 model being the Super De Luxe version powered by a 239ci Flathead V-8 engine.

Terms for police cars include (police) cruiser, squad car, area car and patrol car. In some places, a police car may also be informally known as a cop car, a black and white, a cherry top, a gumball machine. Depending on the configuration of the emergency lights and livery, a police car may be considered a marked or unmarked unit. Whatever you call them, since the first incarnation the police car has been one of the most valuable pieces of equipment our law enforcement agencies have at their disposal.

The kit features newly tooled parts. These include; an all-new Coupe body and police car parts including roof lights, siren, spotlight, under the dash radio w/corded microphone and period police decals. Also the standard parts common with the other 1948 Fords from Revell line like a nicely detailed engine, drive train and suspension, radiator and frame, dashboard and interior, printed whitewall tires and chrome plated parts.

As with most car builds, the first steps began with the engine. The flat head went together without a hitch. I only added spark plug wires. Next up, following the instruction sheet, I moved on to the frame and exhaust pipe. It was here that I made a detour and elected not to install the exhaust system at this point and instead send the frame to the paint shop along other related parts to be readied for the next building steps. Once all the parts were painted, I added the exhaust system, suspension, drive train, wheels, and steering. Flipping the frame over, I then added the brake reservoir, engine, and radiator.

Moving on, once the body was prepped, painted and decaled I added the cabin glass pieces and rearview mirror to it. I then added the battery to the engine compartment and drilled out holes for the roof lights before setting it aside.

Next, I built up and finished out the interior and dash. I encountered no problems and was pleased with the results. The only thing that seemed out of place was the two-way radio. To me it looks more like a 1970's CB radio than something from 1948 but this is only my opinion.

After test fitting the interior with the floor pan and frame component, everything was installed into the body. The 3 main build components all fit snugly into place. I added the tires and rims here and finished the rest of the build by adding the chrome parts, bumpers plus all the police bits.

I highly recommend this build to anyone who likes building for the enjoyment of the hobby and to the serious modeler who wants a great canvas for building a masterpiece. Thanks to Revell and IPMS for the opportunity present this fine model kit.