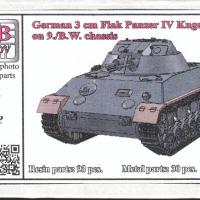 The Flak Panzer IV Kugelblitz (fireball) is a Panzerwaffe ’46 model. There was an idea for a Panzer IV armed with anti-aircraft weapons, something like the Wirbelwind, but with 3cm guns instead of the Wirbelwind’s 2cm guns. The concept was for an enclosed turret, providing protection lacking in the Wirbelwind, and greater stopping power from the larger caliber guns.

The model is almost all resin, with some PE parts. If you look at the picture with the parts laid out, you can see that there are a LOT of resin parts in this kit. The result is very fine detail in the wheels and suspension and the Panzer IV hull. The tracks are resin, and go on the tank in an interesting manner.

As I started this project, I decided that I wanted to do it in Wehrmacht late war camouflage of overall panzer yellow with sprayed on dark green and dark brown. So I painted all of the resin parts with a medium yellow acrylic paint which looked pretty good. Well, it looked fine, but whenever anything touched the model, the paint would scrape off. I used a stiff brush to remove all of the acrylic and repainted everything with a Model Master enamel. That worked.

Further work was done by painting the rims of the road wheels and return rollers flat black for the rubber tires.

I began with the suspension and road wheels. I put the suspension on the hull, and added the axles for the return rollers. Then I had to assemble the road wheels and return rollers. This was a project unto itself, as each wheel is a pair of wheels, and there are 8 wheels on each side, plus 4 return rollers. Since this is a resin kit, I used gel type CA. I am also very glad I have a tool called a “Glue Looper” which allows fairly precise placement of small amounts of glue on the parts.

Once the wheels and rollers were assembled, I put them aside for a while and put the upper hull in place. Part of this process is installing the PE fenders. The instructions are a little vague on exact placement of these parts, but using photos obtained from Google, I was able to figure these out.

At the front and back of the fenders are parts which are attached to the fenders with hinges. The hinges are given as separate PE parts, and they’re about 1/16 inch (1.5 mm) square. They need to be bent to match the angle of the added parts, and then put in place with minimal CA. I had to use my jeweler’s magnifier to see the parts and an arm rest because my hand shook too much to get these parts in place neatly. This is just about the epitome of detail modeling for me.

I then assembled the turret. I left off the guns until the end, because I have a habit of accidentally removing small parts while working on the model.

I test fit the turret. It didn’t fit. The rounded bottom of the gun stuck out too far to allow the turret to fit to the hull. I had to cut a hole in the hull to allow the turret to fit. This wasn’t a terribly hard job as far as figuring out where to cut, the hull has an area exactly the size and shape you need, it just isn’t deep enough. So I got out my razor saw and started the cut. I discovered that the upper hull has several braces inside, which meant I had to sometimes put more pressure on the saw. The braces are super from the point of view of making the hull immune to warping or cracking. But this also meant that I separated every one of the suspension brackets where the super glue let go from the pressure. Very fixable, just slowing down the progress.

I already had the vehicle painted dark yellow, all I had to do was put on the camouflage. I used my airbrush at lower than usual pressure, less than 20 psi, and set the stop so I wouldn’t pull the trigger back too far. I thinned the paint more than usual. It was then just a case of drawing a series of lines in color across the upper hull and front and rear. The nice thing about doing a “possible” project is that there’s no prototype to prove my scheme wrong.

So back to the suspension and tracks. I put the drive sprockets in place at the front. They went in pretty nicely. I put in the wheels at the back. They had a small attachment piece which probably allowed track tensioning. It’s small enough to really be a project to install. But I got that too.

The road wheels on the bottom went in pretty well. With all those rollers, it required some care to get all of them in place and pretty well aligned. The return rollers, being smaller required less care, because there’s more room between them.

The tracks were a problem, in that they come in 2 pieces of track per side. And the piece length is such that two pieces are more than enough to do that track. So I installed one piece, putting the ends at the top, under the fender where the joints would be harder to see. The tracks were a little stiff, but I was able to use CA to keep them on the drive sprockets and the road wheels. I also managed to knock one of the rear rollers off while trying to bend the track around it. Easy fix, though. Once I had the single piece installed, it was a moderate task to cut the other piece to length and install it, because it fit under the fender, and there isn’t much room in there. But it didn’t require any bending, so it went in pretty nicely.

I installed a couple of small detail parts and the guns.

And the Kugelblitz was finished.

Recommended. This kit is not for the ones who want a simple kit which goes together in one evening. The extreme detail, the large number of parts to get around the simplification you find in some 1/72 armor, and the resin parts make this a kit for a project. That and the $50 price make it a kit for the dedicated armor modeler who wants to do something which is a super model and is out of the ordinary in several ways.

Thanks to OKB Grigorov for the superior review kit, and to Phil and IPMS for letting me do this review.