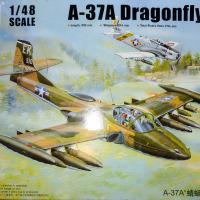 Trumpeter describes the history of its latest kit subject, the Cessna A-37A Dragonfly in 1/48 scale, on the box. The Dragonfly was developed from the T-37 trainer for combat service in Vietnam. A series of new components were applied to the aircraft, including: one GAU-2B/A 7.62 mm minigun, two drop tanks on the wing tips, three weapon stations under each wing, stronger landing gear, and two more powerful J85 engines. The new A-37As were affectionately nicknamed the Super Tweet. They were sent to Vietnam as part of the 3rd Tactical Fighter Group, 604th Air Assault Squadron on July 17, 1967.

What’s in the Box?

The kit has approximately 170 pieces on six sprues molded in light gray plastic featuring Trumpeter’s signature lightly engraved, but crisp, panel lines, along with one clear sprue. There is one small sheet of photoetch (PE) and a two small sheets of decals: one for the ordinance and one set of markings for an aircraft that would have flown with the 8th SOS/14th SOW, Bien Hoa AB, Vietnam. The plastic is well formed with no flash and the clear sprue is packaged with pieces of foam wrapped around it. The plastic is extremely sturdy, so it can be man-handled some, as I learned from experience.

This is a relatively simple build. The aircraft’s fuselage is split into two pieces, the chassis and the body. The chassis is an easy build. The cockpit assembly is very straight-forward; it is completed in seven steps. Keep in mind, this is a very detailed cockpit, and I was extremely pleased with it. As I’m kind of sluggish with PE, I had a hard time with the seat belts and should’ve stuck to my old trusty tape method. Once the cockpit is assembled you can join the fuselage halves together. Unlike the old Monogram kit, the rear radar is not a separate piece, and you will need to make sure you achieve a positive alignment to avoid a lot of trouble and sanding.

The next step includes the assembly of the front intakes and exhausts. You will also need to drill holes in part B1 for the wing pylons unless you do not plan on adding any weapons. The wing-tip tanks provide a great opportunity to add weight, along with the crevice in the nose section. I didn’t think the kit would be a tail sitter, but I added weight just to make sure. Parts C22 and C21 gave me a little bit of a hard time and required shimming. I don’t know if this was on me or the kit, as I felt the kit was going together wonderfully without the use of any filler. Regardless of the reason for this odd fit, I shimmed the parts and was pleased with the look of the results.

After the aircraft fuselage and wing assemblies are joined, it is time for the canopy to be added. This offers another option: open or closed. Part A3 is used for a closed canopy, while part A8 is used for an open one, along with a lot of small photo etch pieces to detail the canopy. Once you have decided on a canopy position, it’s time to flip that Tweet! The wheel and strut assemblies were pleasant to work with and are actually sturdy enough for this kit. The wheels can be painted and detailed separately from the gear, which made life a lot easier for me.

Once again, working with the PE parts was the only portion of this build that gave me a hard time, and this is due to my on and off again relationship with PE. The FOD screens, which are constructed from four PE pieces, require extremely gifted hands and eyes to bend the small nubs of the screen hinge’s connection points.

The final stage of assembly covers the pylons and ordnance, and boy does this kit come with enough! Can anyone say “spares galore”? In fact, the kit has two sprues dedicated to just weapons. I chose to use the SUU-11 minigun pods, the two M117 750 lb. bombs, and the four Mk 81 250 lb. bombs.

I chose to expand my painting skills by selecting the great looking, but obviously more challenging, Southeast Asia paint scheme. I used Tamiya X-2 White for the belly of the aircraft. When I started painting the camo, I first painted the entire upper half of the aircraft tan using Model Master 1742 Dark Tan. After letting it dry overnight, I used Silly Putty and 3M Painter’s Tape to mask off portions of the tan for the camo. For the greens, I used Tamiya XF-57 Olive Green, XF-67 Nato Green, and Model Master 1713 Medium Green. I then allowed the paint to dry another 24 hours. With the paint dry, I used Future to coat the Dragonfly and prep for decaling. The decaling process was a joy. Between Micro-Sol and Micro-Set, I only had to use Walthers Solvaset on decals 3 and 4, which were the intake warning signs.

It’s great to see Trumpeter bring out a new tooling of a fond underdog, especially when you also consider the other aircraft that stole the show during the Vietnam War. This is honestly one of my favorite aircraft, and I dreamed about the possibility of a new Dragonfly kit for a while. Just ask my great friend and fellow modeler Matt Quiroz! In the heat of the Kuwaiti desert, I sent Matt an email as soon as I found out they were actually releasing a new one!

My thanks to IPMS for the patience that was shown to me as I battled some health problems that threw a monkey wrench in my progress. My thanks also go to Stevens International for providing me with the opportunity to review this kit.