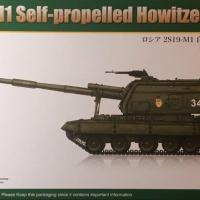 One of Hobby Boss’ latest releases is the Russian self-propelled howitzer known as the Msta-S, or officially the 2S19-M1. The design of these vehicle began in the early 80s under the “Ob-yekt 316” program. Mounting a 152mm howitzer, the Msta-S can fire just about every type of munition in the Russian arsenal, including all types of high explosive, smoke, chemical, tactical nuclear, and even some laser-guided munitions. The Msta-S is basically the Russian response to the United States’ Paladin program, an armored self-propelled large gun to provide indirect fire support. The 2S19-M1 has seen operational use in the Second Chechen War, and more recently in the conflicts in the Ukraine.

Upon opening the box, you find a rather small number of parts and sprues. In fact, there are only 2 sprues in the kit, with the turret, upper and lower hull, and tracks provided as separate parts. Each part and sprue is individually wrapped in and packaged. A small set of decals is also provided with very basic numbers and insignia. The instructions lay out the build in 7 quick steps.

Like most armor builds this one starts with assembling the hull, which basically come in two parts with just about all the details already on the parts. The tracks, road wheels and sprockets half completed. You’ll need to add the outside road wheels, as well as the outside of the drive sprocket, but other than that the tracks are nicely detail, as are the wheels and sprockets. Having this already detailed, really speeds up the build. In fact, since so many of the details are already included in the hull and turret, there really isn’t a lot of major work to do on the model, other than attaching 19 grab handles in various places. The build goes very quickly, and I was able to get it built and ready for paint in just one afternoon. The details are very nice, and so is the fit. Actually having a quick and relatively easy build was kind of relaxing.

The instructions are fairly clear, but you’ll need to pay attention to where to place all of the grab handles, because it’s not always shown. Also, the handles may be a little out of scale, but I wasn’t interested in swapping them out for wire, or some other replacement. The turret and hull sides have small indication markers where the handles should be placed, but I drilled small divots into those locations to make gluing them a little easier.

One issue I did have was with the gun barrel. It has a long seam down the entire length of both sides of the barrel. Considering the gun is such a prominent feature of the tank, it was a little disappointing. Granted, this is a regular thing for people who build armor kits, but on a new kit, it would have been nice to have a slide molded part for this to reduce any seam issues.

There are 2 choices of camouflage markings for this kit. Green, or a three-color camo scheme. The instructions provide color call outs for 6 different brands of model paint, which is nice. However, the illustrations are so dark, it’s difficult to tell what the pattern on the camouflage actually looks like based on the drawings.

Other than my relatively minor issues with the kit, the finished product looks very nice. The details are very well done and it goes together very easily. I decided to just go with your basic Russian Green and just the basic markings identified in the instructions. Honestly, even looking at pictures on the internet, there’s not a lot of variation in what the actual vehicle looks like, so basic green and basic insignia works well.

This would be a great kit for a new model builder due to the ease of assembly, and the relatively simple painting options. Thanks to Hobby Boss, MRC, and IPMS/USA for providing the review sample.