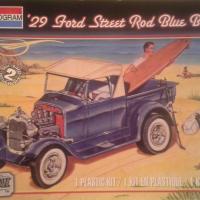 The Revell/Monogram 1/24th scale kit is a rerelease of a previously available kit known as “The Blue Beetle“. I am not sure of the exact offerings provided in that earlier release of this model but the version that I’m reviewing here was quite impressive . The box art only shows the build up on the side and the drawn box art on the front of the box outfitted in “The Blue Beetle” version. The only way I’ve seen this release come in. So, I was thrilled to open the kit up and see parts for both the pictured version as well as the roadster adaptation listed for these separate parts throughout the very well detailed instruction sheet which includes descriptions of all pieces by their part number and the name of the part. The majority of the parts come molded in a light blue with one white sprig of pieces molded in white which includes snap in white walls and a convertible top. Among the added pieces are two different drive train choices that consist of two separate rear end assemblies.

And two different leaf spring choices for both the front and rear as well. As far as the engine is concerned there’s two different chromed power plant add ons including a six carburetor configuration or a dual carburetor set up atop a two piece high rise manifold. Also included are two sets of valve covers for the different engines. The kit certainly impressed me with an absolute sensational amount of chrome offerings throughout the kit . Three trees worth to be exact .These included multiple sets of wheel options , the chrome bumpers and light assemblies as well as the drive train accessories listed earlier. The only thing I had to do was cut the holes slightly bigger at the front of the block to put the water pump belt assembly into them at the front of the engine. But that was a simple task.

The only other thing, and probably the biggest complaint I would have is the look of the carbs molded on top of the high rise manifold. They aren’t detailed very well and that is important as they are a visible part of the engine in the roadster building option.

The body of the ’29 Ford is beautiful. I loved the running boards’ details in that the engraving is crisp and the Ford step plate looks great on the finished product. I painted the body in a TESTORS Flaming Orange lacquer ,coating it in several light coats over TESTORS one coat silver . I put it on until it was the darker shade that I wanted. The fender assembly was painted in TESTORS Diamond Rust which is a great looking metallic silver. The decals are wonderful and come with all the wood for the truck bed printed in decal form if you want to use them that way which I did . They were fantastic looking. Also the optional stake sides come with decals as well . The decal sheet comes with other pinstripe options as well. And to top it off this kit comes loaded with diving gear (snorkels , fins , mask, spear gun , belt and tanks) as well as a two piece duffel bag.

When I started putting this beautiful car together I decided to build the roadster version in the instruction sheet complete with the stake bed because that adaptation was never put on the box. I think others viewing this would love to see that version of this great looking and fun to build model.

My hat's off to the folks at Revell for allowing me to recreate this superb kit. I would recommend that many of you fellow modelers would really enjoy building this one ! And also to IPMS/USA for giving me the opportunity to review this kit. Thanks !!!