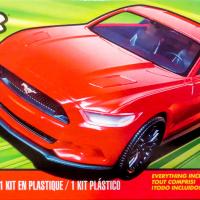 I usually write about various aircraft-related items, but when I saw this Revell 2015 SnapTite Mustang I thought my son could pitch in and help with a review. He is almost nine, is an IPMS Junior member, and has several models under his belt. William primarily builds aircraft—like his dad—but the Mustang is one of his favorite cars. While most of his builds have been glued together and painted, he is still right in the target audience for this SnapTite kit.

SnapTite™ Build & Play: We unveiled the 2015 Ford Mustang GT kit at the Detroit and Chicago Auto Shows earlier this year and received tremendous response from thousands of kids who built them. These kits are simple enough that even young children (6+) with no previous experience and supervision can assemble them. Besides having fewer than 14 pieces, these kits are designed for play with their rolling wheels and tough bodies. We enhanced the product with vibrant packaging illustrating what a model kit contains, how the project is accomplished, and the time required. And showing its fun too.

“So, the first thing I noticed is that it was packaged really well, and the bags were sealed airtight. So, all the parts stayed inside of the bags. The way it was packaged, it looked like it was already assembled when I took it out of the box!

For me, this seemed very easy to build. I currently build glue models, but before that I used to build SnapTites. I think this is probably too easy for a nine-year-old, and for a six-year-old who already builds SnapTites, it would still be a little easy. I think it would be just right for a five- or six-year-old if they have no modeling experience.

There are no pieces to remove from sprues; they are all separate and in grouped in individual bags. This model has a lot of detail, including the Mustang logo in silver and colored tail and headlights. The interior is very detailed, especially the dashboard, but I wish it had included a rearview mirror piece. It does have a square on the windshield where the mirror goes, but not the mirror itself. It also does not have any side mirrors. The interior is all in black and went together very smoothly.

The wheels spin really smoothly, and it drives very well and straight. It has no turning problems at all. The wheels seem very solid, which is different than a lot of other SnapTite kits I have built.

This took me about five minutes to assemble (including opening the box and taking pictures). I think it would take a five-year-old about 10 minutes and a six-year-old a little less. The instructions were extremely easy to follow, and I had no difficulty building it and understanding where all the parts go. I think this is more solid than other SnapTite models I have built, and it drives really fast!”

One Last Note from Paul

I think this would be a great starter kit for any young kid. There are no parts to remove from sprues (so no knives!), it has nice colors and some good detail, and seems solid enough to play with. I think this can be built unsupervised by kids five and up, and goes together quickly and solidly enough to avoid potential frustrations. I think this would please any junior Mustang fan. Good job Revell!

Thanks to Revell for providing the review sample and to IPMS/USA for allowing my son to review it!