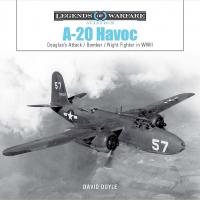 David Doyle's book on the A-20 Havoc is one of the latest entries in the 'Legends of Warfare' series with entries in Ground, Naval, and Aviation. The Legends of Warfare series has expanded rapidly since its 2017 debut in the market with now over 100 titles released. This hard cover series covers a wide variety of monographs at a good price point.

After many years of being published in enthusiast publications focused on military vehicle restorations, David Doyle 'graduated' to full-fledged books in 2003. His first book was a hefty 512 page history of US military vehicles. He has now had more than 175 books published in military vehicles, aviation and naval topics. David and his wife Denise have amassed a collection of ten Vietnam era military vehicles that still displays at shows. In June 2015, was honored with the Military Vehicle Preservation Association's Bart Vanderveen Award, given in recognition of "...the individual who has contributed the most to the historic preservation of military vehicles worldwide." Be sure to check out David's website.

Originally designed by Donald Douglas, Jack Northrop, and Ed Heinemann in 1936, the DB-7 was dropped following reports from the Spanish Civil War. Responding to a US Army Air Corps requirement in 1937, the updated proposal was designated DB-7B and featured a more powerful and capable aircraft. First flight was achieved on October 26, 1938. France was the first to place an order (100 aircraft) for the DB-7B as the clouds of war in Europe were stirring. The DB-7B received some improvements in power and a deepening of the fuselage as a result of the French order. The USAAC eyed this updated design and ordered 186 of this aircraft as the A-20. Some 7,478 of all versions were eventually built and served in all theatres of World War II. The Havoc saw service with the French, the British (as the Boston), the Soviet Union (under Lend-Lease), Australia, and the United States. The Dutch had placed an order, but they were delivered to the Dutch East Indies (where Japan ended up getting their hands on one for evaluation).

The front cover features a black and white photograph of a Douglas A-20G-20-DO Havoc (sn 42-86657), one of 2,850 of this model [an enlargement of a photo found on page 43]. Originally fitted with four 20mm cannons, they were replaced with .50 caliber machine guns due to jamming. The rear cover features a color photograph of the Long Beach factory with the nearest aircraft being a A-20B (41-2687). You get 112 glossy pages graced by clear, well captioned, photographs. I counted 176 photographs; 83 in color and 93 in black and white. Many of the selected photographs are being published for the first time. The Table of Contents includes:

David Doyle does a great job of covering the Havoc from the Douglas Model 7B to the P-70 Nighthawk through well-captioned photographs. Most chapters begin with about a page of text describing the Havoc variant, followed by period photographs, many in color. You can see from the Chapter titles many of the variants that are discussed. This book is an easy read, with the majority of the text being in the photo captions.

I was surprised to learn that the P-70 Nighthawk saw very limited service, primarily be used as a trainer to support the Northrop P-61 Black Widow. Still some saw service in the Pacific on Guadalcanal and New Guinea, but only two kills were attributed. Primarily this was because the P-70 didn’t have the power to intercept Japanese fighters. Still, I have fond memories of building the Revell 1/72 P-70 as a teenager. Indeed, there is no shortage of Douglas Havoc/Boston kits in 1/72 and 1/48. Going up to 1/32 will require a bit more searching to find a Combat Models Havoc, although HpH models has been promising one for a few years.