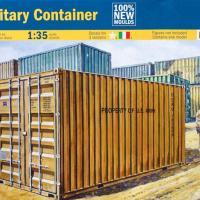 In the current hobby where making obscure one-offs has seemingly become the norm and where every manufacturer feels they have to make a kit with more than 300 pieces and at least one 2x3 sheet of photo-etch, Italeri stands alone! I must applaud them for making that stand! One of their latest releases is a kit that contains only twenty two pieces. There is no PE, no clear or colored styrene, and no metal. OMG!!! This is ridiculous! There must be a mistake! It isn’t even a kit of an armored vehicle of any kind! However, it is more valuable than any M1, M1126, M113 or M117. It is also more easily recognized and used than any of the above mentioned vehicles. Italeri has made a bold move and issued a model kit of a 20-foot container.

This may seem like a lame idea for a model kit, but I would rather have one of these than the latest uberunterflueggeshutz 3000 that never made it off the pages of some German mad scientist’s dream book. Why, you ask? Simply because this is one of the most useful, used, and often overlooked items in the armor modeling realm. Support forces (vehicles, equipment, and figures) are so often overlooked and left to the cottage industries to attempt simply because they are not as cool as something that shoots. Never mind that the shooting vehicle was never made, it is just the way it is.

As already stated, this kit consists of 22 parts of grey styrene on two sprues and a decal sheet that has three painting and marking options. The doors are designed to be closed. However, you can open them easily, but as there are missing items, it will look weird. They look weird closed, too, but it appears more acceptable that way. I will discuss more on that later. The parts are almost injector-mark free and beautifully detailed in crisp grey styrene. The few injector pin marks are all contained on the inside or underneath, and most are covered by the corner uprights. My only first-look dislike is that all the markings are for Military conexes (military term for containers). You can mark it as a US Army, US Marines, or a Italian Air Force conex. A set of Hyundai, Yang Ming, or some graffiti decals would have been a really nice touch. Italeri did this for their 1/24 release of this model and it would have been a nice addition to this kit as well.

Assembly was straightforward and simple. It took me 4 days, and that was only because of my use of liquid cement and wanting to make sure it had dried for 24 hours. I assembled a side a day to make it easy. The floor, roof, and back are made up of two pieces each. The sides are single pieces. I think Italeri should have made all the sides a single piece, and this would have been great. I am sure it was a space per sprue issue, but it definitely would have sped up building and cleanup time.

I was going to leave mine closed, so I was not worried about the little gap on the floor. The roof and rear were a different story. Both required cleanup, which was not the easiest thing to tackle. If a builder decides to leave the doors open, he will have to fix the eight ejector pin marks on each inner door face. The door handles are locked in place. The doors can be opened and the handles relocked and left in an open position. The down side is that the roof and floor lock cams are not present. This affects the overall look of the mechanisms, but really stands out if you leave the doors open. Another issue is the final assembly directions in step 2. In one picture, the instructions tell you to assemble the handles one way, and the other picture shows them opposite – and to complicate matters, the box art shows another configuration.

The front two doors did not align properly. It could be the inward sway created by the long, no-support beams in the middle effect, or could just as easily be the way I assembled them. My fix was first to glue the doors to the outer sides and allow them to dry. I then glued the two doors together and allowed them to dry as well. I then ran glue across the top and bottom of the doors and used Blue Tape to ensure the doors laid flush with the outer container edges. In the photographs, you can see the top side inward sway I was referring to.

The container was given a coat of Model Master Armor Sand and allowed to dry. Future was then fired onto it to facilitate decal application. Italeri still likes to use those matt-coated decals. Even though the decals were thick compared to others currently on the market, they reacted well with MicroScale solutions and conformed nicely over the corrugated sides of the container. After the decals had dried for two days, the container received a coat of Model Master DullCote and again allowed to dry. The decal thickness does show when viewed at an angle, but overall it’s not that noticeable. I did not wish to add a wash of any type as I think it looks great the way it is.

I would like to thank Italeri for releasing a kit of a useful and often overlooked subject. With EVERY Military Service using this item, it has so much to offer. Thanks also to MRC for donating this excellent subject to be reviewed. Also, my thanks to IPMS/USA for allowing me to review it and giving me and others a place to post it and read about it. Pick up one of these (or more if you want) and see what your imagination can turn out.

The ultimate use of shipping containers
Previous Next