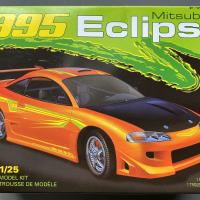 Named after an 18th century winning racehorse, the Mitsubishi Eclipse was a compact two door car with a design meant to appeal to younger buyers. When coupled with a four-cylinder engine capable of up to 210 hp, the car found success and its production ran from 1990 to 2014. During that time, over 900,000 units were produced and the power maxed out at 265hp. This history alone would justify the car’s success, but in 2001 the first Fast and Furious movie was released. In it, Brian O'Conner (played by Paul Walker) drove a lime green modified 1995 Eclipse. That car and a few others in the subsequent movies because icons of the street car world. AMT first released this kit to capitalize on the success of the movies and now Round 2 Models has reissued the kit with a new decal sheet that allows the modeler to create variations on the original theme. Note that you will have to find some instrument decals for the dash as there are none in the kit.

The kit is molded in orange plastic and is the same as the original issue including the body kit panels and options for wheels, front seats and wings for the trunk. Castings are very clean with little flash. There is a chrome sprue that includes wheels, exhaust and backing for the headlights. The clear parts include separate windshield, rear window/side windows in one and clear lenses for the headlights. The rear taillight lens in done in clear red plastic and four nice rubber tires round out the kit.

Build-wise this kit presented two challenges. First, the chassis does not sit level out of the box. The front end is higher than the back. My solution was to install shims between part 47, 45 and 44. Then I cut the front struts from the spindles and re-attached them to the spindles allowing the front end to drop and level the chassis. The second issue involved the taillight lens that didn’t conform to the recess on the back of the body. This problem was solved by thinning the back of the clear part and gluing the ends but not the middle. The rest of the build is straightforward. The bucket race seats have belts molded on and look good with careful masking. The engine compartment is sufficient with some paint. My only modifications to the body parts were opening the side vents on the front clip and reshaping the cross piece of the wing to an aerodynamic shape as opposed to the rectangular section it was molded with.

The body color is a mix of decanted Tamiya pure white rattle can lacquer with a fine gold powder I borrowed from my daughter's nail art supplies. Decal application was easy, and they responded well to Solvaset. I cut the back windows from the rear window and fitted them individually. The mirrors are very delicate so you'll have to be careful before and after installation.

In conclusion, this kit is still relevant and builds up into a nice model with the right amount of care. A cool flashback to a design that still holds up. Thank you to Round 2 models for bringing this kit and many others back for us to enjoy and to IPMS for sharing the sample with me.