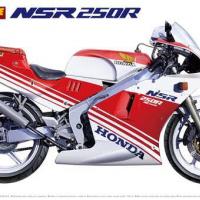 Introduced in November of 1987, the NSR 250R was the second generation of the NSR line. In what many would call the best year for the NSR line, that model year introduced many innovations that made it a race winning performer. The most significant advance was the PGM module that controlled the carburetor performance, based on input from the throttle and speedometer to adjust the carbs in real time. This was the first computer control of its kind on a Honda motorcycle. This was in conjunction with the Honda RC, or” revolution control” system, an adjustable exhaust valve that constricted outflow at low RPM and opened at high RPM to produce optimum power at any throttle setting. Added to coated pistons to reduce friction wear were larger tires to keep the bike on the road and a powerful 249cc engine producing 49 hp. I’ve never ridden a motorcycle over 125cc and I thought that was impressive! The NSR 250R of this generation was a proven winner at the track, and this model represents what was a race-ready, street legal version of this important addition to motorcycle history.

Aoshima has done a brilliant job with this kit. The top-open box has a nice color illustration of the NSR 250R that I found helpful for painting references. Inside, there are nine sprues in white and two in clear. Next is a nice decal sheet with the two colors that were offered in 1988, two rubber tires, and a bag with a spring for the rear shock, two screws for the front wheel and fork assembly and tubing for the brake, clutch cables, and overflow tube on the fuel tank. A masking set is also included for the front fairing. All the parts are up to modern standards. The instructions are in booklet form and include a color chart with Creos color references.

There are 13 steps to completing the model. Since this is the first motorcycle kit I’ve ever done, I paid close attention to the instructions. Similar to car models, the engine assembly is called out first, and it builds up very nicely. A few of the part were called out to be “temporary attachments.” I used white glue on those. The instructions would have you remove some raised lettering on the wheel spokes, but I chose not to. The rear shock absorber has a real spring which is a nice touch. The first of two screws is used to attach the rear wheel to the frame. Make sure you use the long one, as they are slightly different. Next up, the frames come together, and then the exhaust. I found this kit a bit of a challenge because I don’t know my way around motorcycles, so it wasn’t as obvious to me where certain parts should go. The one area I did botch was on the instrument cluster. When I read the directions I assumed the round parts shown over two of the dials were clear lenses. Wrong! When I tried to work the decals into these deep recesses, I was horrified to see them spilt into pieces! Turns out those round pieces were supposed to go in BEFORE so the dial face would be raised to the surface. The decals would have worked. How do I know? Because the third one was almost level and it didn’t split. Lesson learned for next time. The brake, throttle, and clutch lines took me a while to figure out, again more because I didn’t know this subject very well. The only areas I had to clean up seams were the exhausts, gas tank, seat fairing, and the lower cowl. There is a separate clear sprue of the lower cowl if you want to see the detail.

Painting was the easy part of this build. I used Tamiya sprays and Alclad Metal finishes on everything. The clear red and clear orange are also Tamiya. The masks for the front fairing worked very nicely – just make sure you line up the front and back masks.

As I said before, there are decals provided for two color variations, Fighting Red /Ross White and Terra Blue/Ross White. The box top claims these are “premium silkscreen” decals. At first glance, they are very nice. The color density is very good and Aoshima has provided all the decals you need to avoid painting anything other than the white base color. After the instrument decal debacle, I decided to do the most difficult decal first, the gas tank top. I used my normal routine of Micro Set and water, and the decals didn’t flex at all. So I had to break out the big guns – Solvaset. Even then, it was not easy to get cooperation from these decals. I ended up using what I would call the flood and press technique. Liberally coat the decal with Solvaset, then press it into place with a damp cloth until it stays down. I ended up with some small wrinkles but eventually I got them all on there, but there were gaps in the red color. Luckily, my wife has an extensive collection of nail polishes and – wouldn’t you know it – she had a match. It was called “Scorcher” from the MAC cosmetic line, and it worked great. The color density did live up to the box top claim, but the red has a pink tint to my eye. I found myself wishing I had done the blue version about halfway through the process.

I had a blast building this kit. It seemed to take a long time because this type of kit literally comes together at the end of the process. I struggled a little with some of the assembly steps, but that’s more my lack of experience with this subject. In the end, the instructions did their job and I‘ve got a cool model to display as a result. The box recommends this kit for 15 years and up, and I would agree. There are some complicated sections to this build that require an experienced hand. I can see more motorcycle kits like this in my future. I give this kit 9 out of 10. In other words, if you’ve never done one or even if you have, this is a winner.

Thanks so much to Dragon Models USA for the sample of this fine kit and to my friends at IPMS for allowing me the pleasure of building it.