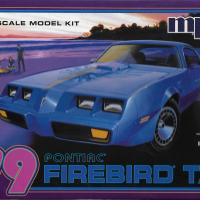 In 1979 Pontiac sold 116,535 Trans Am models which still hold the record to this day. My relationship with the Pontiac Trans Am goes back to an evening ride with my high school chum Kendal Morbito in his white 1976 Pontiac Trans Am. We cruised around town a little then headed out to the freeway. After two rather abrupt high speed turns the yanked my eyeballs from the sockets, I was hooked. On December 23, 1977 I spent all the money I had been saving since my first job on a brand new shiny blue 1978 Pontiac Trans Am.

MPC’s re-release of the 1979 Pontiac Trans Am brings that iconic vehicle back to the hobby stores shelves. At close to 40 years old the molds are showing there age these days with light flash on most all the spure and fairly heavy mold seams lines running though out the body. The box says to build 3 versions, but that is truly a stretch. More likely there is a stock/street version and a racing version with separate floor pan, role cage, racing wheels and racing exhaust. Surprisingly there are no alternate tires for the race version. The t-top is molded into the roof, if you choose to build that version you will need to supply your own t-top glass. If you do not want to build a t-top version you will need to carefully sand off and putty the raised detail on the roof. Additional accessories provided are a CB radio and antenna.

I choose to build mine stock and as close to a representation of my 1978 TA as possible using the MPC ’79 TA.

Typically the instructions start with the assembly of the wheels and tires. Next you move on to building the fair representation of a small block Pontiac V-8. Pontiac Engine blue was used to paint the motor and I upgraded the kit slightly by adding a MAD distributor and coil. Truthfully 1979 Pontiac motors would have a HEI distributor anyways which unfortunately is not represented in the kit.

Further sub assemblies are of the radiator assembly, rear and front chassis, stock and racing interiors including a role cage. The stock interior has acceptable detail and with a little painting looks to be a reasonable depiction. Just a quick note the exhaust is molded to the rear drive axle so it is installed with the drive train and does not include catalytic converters.

At this point the chassis, engine, interior, radiator, firewall, wheels and glass come together in steps 13-15. If you are building the race version you will have already installed the exhaust in step 7 and the interior with roll bar in step 10/11.

I found all the chrome to be a little heavy and chose to overcoat with Tamiya clear smoke instead of stripping and re-chroming. This was particularly handy in adding some additional depth to the rims.

The decals are thin in nature, somewhat flexible and went down with just warm water. I’m happy that there were three “Screaming Chicken” versions of decals to choose from.

The parking lights, brake lights and grill inserts were painted with flat black, clear smoke, clear yellow and clear red. To add to the realistic finish of the kit, I chose to add an appropriate computer printed California license plate.

Little Tip of the day. The head lights on the Trans Am are depicted using chrome inserts. Prior to installing, these were painted with a #1 paint brush applying Tamiya clear smoke around the outside edge of each lamp. It’s and easy trick which adds a realistic 3-D color effect to the lights.

Overall the kit fits together without too much work and I only used a little putty on the engine block/transmission halves and roof. One thing I felt was seriously missing in this kit was tire options. In fact, the Trans Am was specifically chassis tuned to radial tires which are missing from the kit. The MPC 1979 Trans Am was a very enjoyable build which took me 10 hours over 3 days to complete.

Thanks to Round 2/MPC, Dick Montgomery, Dave Morrissette, the rest of the IPMS Reviewer Corp assistants and IPMS/USA for the chance to build and review this subject.