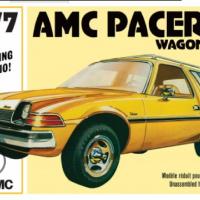 Back in ’77 the AMC Pacer was arguably ahead of its time. The expanded windows were a definite safety feature allowing greater visibility, and the sub-compact (now the same size as some mid-size cars) had great fuel consumption. Unfortunately, it was “too far ahead” and people described its odd look as an upside-down fishbowl.

This 2016 release #AMT1008 is a Retro-Deluxe re-pop for this kit which has seen several box arts over the years. It needs glue and paint, so it would be recommended for modeler 12 and older. The overall model is simplistic as many of the detail work is molded in. As an example, the block on 14 piece motor has a molded-in exhaust manifold and fuel pump. The gas tank and frame rails are molded into the floor pan and the door panels are molded into the interior bucket. For the experienced modeler this would be a “weekender” but it would also make a great “step-up” kit for a novice builder. It’s what I would call a “tweener” and most appropriate for that age group.

Flash is pretty minimal and not overly cumbersome and sprue attachment points are not as heavy as some of the mold designs from that era, but there will be some extra work to do to make this a nice shelf model. The main parts were pretty straight and most of the attachment points were well defined. The hood did have some warpage that was corrected by the hot water bath and the chassis pan was pretty straight. Curiously, there is no engine bay cowl. The windshield just hangs over the firewall there. It’s not a contest model base because of the molded-in detail and the dash lacks gauge decals but when taken in context it makes for a presentable display in its own right. Subject matter might be king here because AMC Pacer kits are not being developed for retail sale nowadays.

On the other hand, this kit has some pluses that deserve to be mentioned. It has some really great decals for food delivery service businesses that would work out great for commercial/custom versions of this kit. Included are some Big-N-Little tires (albeit they are two pieces styrene units requiring assembly and paint) as well as a custom hood, grill, front/rear fascia, side panels and wheels. As a bonus, there is a CB Radio and external antennae and a roof rack, just like the good ole days. Most of the body moldings are crisp and take foil easily except for the side door windows that I felt best to use the silver Sharpie pen on. The undercarriage does have separate exhaust and driveline components for detailing opportunities there. The AMC six cylinder engine and tampo printed Goodyear Rally GT tires might be worth the price of a kit all by themselves, as not many manufacturers are including tires with branding on them anymore.

This is a simplistic kit that I would describe as a “tweener”. It is pretty easy to assemble and fills the gap between snap kits and full glue kits for the novice builder looking to increase his/her skills. It’s also a “weekend” build for the avid modeler looking to build something that is quick and just pure fun. The parts fit together well and the gluing points were positive. The parts were straight except for a little hood warpage. Conversely, the kit comes with some great customizing features and decals for delivery service liveries. I built the kit stock but you can totally change the vibe of this kit with the included custom parts. I could totally see Garth getting out this car and delivering a pizza for the big bash! Thanks goes out to Round2 for re-issuing this nostalgic kit and to the IPMS for letting me share this review with everyone.