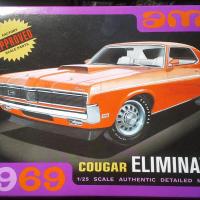 The newest offering of the 1969 Mercury Cougar Eliminator was well worth the effort for the folks at Round 2 to re-release this wonderful kit again. It was a kit that's parts went together very smoothly and without much flash on them.

The real car, when I did my research to build this model came in only four colors. And they were orange, yellow, white, and blue which their actual factory code to get the exact color is listed for you on the instuctions sheet ! The artwork on the box depicts the orange one on the front and sides as well as a yellow one on another flap of the box. Because of that I decided to embark on building it blue.

The body comes with both a spoiler and a hood scoop as well a flat black After painting) colored from air dam to further enhance the look and increase it's performance. I prepped the car in a silver undercoat first before laying the blue over the top of it. The car I received came in orange, although their are going to be ones molded in white as well. I then sprayed it in lighter coats of Testors Icy Blue Metallic paint. The shine on the finished product turned out wonderful.

As far as the instruction sheet, it is well detailed and they also include a handy match & paint card as they call it for all the non chromed parts on the spruces. The engine and interior can only be built like the stock Eliminator. So, the engine is a Boss 302 c.i. (same as the Mustang) with a chrome air cleaner to sit atop a single 4 barrel carburetor. Then the usual dual exhaust which went together so good. The interior consists of a pair of two piece bucket seats and the dash has decals for the gauges. I gave all these pieces a coat of both semi gloss and flat black for the various components. As far as the decals provided they have both black and white srtipes with the word Eliminator on the end of them to go on side of the vehicle. I chose not to put these on at least for now. The decals also had multiple options for the license plates as well. And to finish off this great kit they provided a set of already lettered Goodyear polyglass GT's of the day.

The front spindles went on effortlessly to allow easy tire rotation, a real plus. I have to say I'd recommend this car to everyone that loves muscle cars and that era. It was fun to build this kit and I certainly want to thank everyone out there involved with giving me a chance to build this great reproduction of this car.

Thank you very much to the great people asoociated with Round 2 and AMT as well as the IPMS / USA group. THANK YOU !!!!!!!!