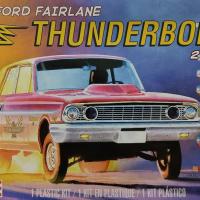 Revell has re-released the ever popular 1964 Ford Fairlane, originally issued in 1990. It is a 2 'n 1 kit so you can build the street version or the classic Super Stock Thunderbolt drag version with a 427 c. i. engine, featuring Dick Brannan's (head of Ford's Drag Racing division) Romy Hammes car. Only 100 for the race version were built. The kit features three wheel style choices, two hood style choices, 4-speed or automatic transmission, and stock and drag tires (8 total). I built the race car version, of course.

This 130 piece kit is molded in white, chrome and clear styrene, with flexible vinyl tires and decals for both versions. The kit instructions are standard Revell and easy to follow, though if you want the name of each part, you need to refer back to pages 3-4. I used all of the paint colors as recommended, but chose white for the body instead of red. Some of the smaller parts have annoying seams, though the fit is generally good. Given the 27 year age of the kit, the molds have held up well and you can make a very good replica of the classic Thunderbolt. I started by lightly sanding the body and removing a few minor seams. If you use Tamiya acrylic lacquer spray, like I did, you may not need to prime the body. But please test on a scrap sprue tree first.

The body and hood were sprayed Tamiya Racing White, a creamy off-white color. Between coats, I lightly sanded any imperfections, and sprayed a total of 4 coats. I then bare metal foiled the chrome trim, and with the side body trim, it was the most I have ever done on a model kit! All went well with a fresh Exacto blade and careful burnishing of the foil to the surface before commencing each cut. Pre-testing each cut with a toothpick helps, then just trust your blade and go! I next placed the decals on the body, and Revell gets 2 thumbs up for the great quality of the decals. They are thin and go on compound surfaces very well. I used Micro Set and Micro Sol, and each decal sat on the surface smoothly and looked great when dry. The clear glass fit well, I used Novus #2 fine scratch remover to buff out each piece and used white glue to attach each piece to the body.

Next came the engine subassembly, if you choose the race option the manual tranny is used, the automatic is for the street version. Remember that the headers go on after the engine is glued to the chassis frame! Remember the engine should be flat black, not the Ford blue used years later. The connecting side pipes are for the street version, the race version gets the stock single pipe and muffler combo that the NHRA insisted the Super Stock class keep attached to the body, even though it was unconnected to the headers. Be careful attaching the super thin front suspension, it can break easily, I should know! I choose the super cool Radir wheels for the front tires and used the steel wheels for the rear slicks. The slicks are raised lettered Racemasters, while the other tires are no-names.

The interior is a tub, so I flat black painted the floor, and after taping it off, sprayed all the other interior parts Testors Champagne Gold, the closest match to the original car's metallic yellow-green. There is not much interior side door detail, so I added photoetch seatbelts.

There are 2 hoods: plain vanilla for the street version and the teardrop air scoop hood with pins for the Super Stock car. The best part is the 427's unique dual-snorkel air intake which begins at the grill utilizing unused headlight openings and extends to the aluminum air box. I sprayed the intake gray, then dry brushed some aluminum to bring out the raised detail, my favorite part of the kit! also, the front bumper was aluminum on the race version!!

The final assembly was easy, the body fits quite well into the engine chassis subassembly with just a tiny bit of adjustment to the front shock absorbers. Overall, a fun build of a classic race car!!

Thanks to Revell and IPMS USA for the review sample.

Finished model of Ford
Previous Next