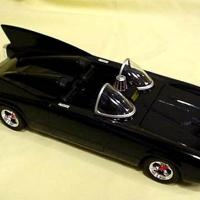 Batman has been around in comic book form since the 1940’s, and while he may not be able to fly or swing from spider webs of his own making, he has always had one thing that very few of the other superheroes have had: a really cool ride.

Playing Mantis (which owns both Johnny Lightning and Polar Lights) is coming out with a whole batcave-load of Batman-related vehicle kits in various scales and media. One of the first to come out is the die-cast 1960’s Batmobile in 1/24th scale. This is NOT the Batmobile from the TV show that we all know so well, but the Batmobile from the comic book. It is similar in many respects to the TV car, but it has some major differences.

The kit comes packaged in what has become a standard box for pre-finished kits: a heavy, oversized cardboard box with a large plastic display window through which the completed body shell can be seen. And the body shell IS completed: painted, decaled, with all clear and chrome plastic pieces attached, and with the hinged hood in place.

Yes, a hinged hood. This is NOT a curbside, skill-level 1 kit. It has a fully detailed engine compartment, poseable steering, and a nicely detailed interior. Glue is required to assemble the kit, and some detail painting is highly recommended. There are also nine (yes, NINE) tiny screws that are used to hold various parts of the kit together.

Aside from the die-cast body, the kit is molded in black plastic, with one small tree of chrome pieces and a set of soft vinyl tires. The pieces come packaged in several separate plastic bags, and mine showed no signs of damage from the packaging and shipping process. The parts are almost entirely flash-free, and the engraving is crisp.

The instructions consist of a single, large sheet printed in English on one side and French on the other. Painting suggestions are provided, but some details (such as the color of the upholstery) are left to the builder’s discretion because they were either never actually shown in the comic book or because they appeared differently in various issues. The construction process consists of five steps: wheels and tires, engine, interior, chassis, and final assembly. Each step has a clearly drawn exploded view of the assembly, with text describing the sequence of steps to follow. All parts are clearly labeled with both part names and numbers.

Each wheel and tire assembly consists of six pieces, including a finned brake drum insert that fits between the inner and outer wheel halves. Once assembled, the wheels fit securely into the tires in such a way that no glue is actually required to hold them there. The wheels are chromed, but it would probably be more accurate to remove the chrome and give them an aluminum finish. The chromed “bat” spinners should DEFINITELY be painted red!

The engine is a 12-piece assembly that builds into a fairly nice representation of a 1960’s V8. The parts count is reduced (and assembly simplified) by combining the cylinder heads and intake manifold into a single piece. The engine block is a 3-piece affair: left and right halves which include the top of the transmission, and a bottom piece that represents the oil pan, oil filter, and the bottom of the transmission. As a result, there are no seams on the bottom of the engine, where they are the most visible. Unfortunately, the oil filter is hollow, and the hollow end is glaringly visible on the underside of the chassis; some filler will be required to fix this problem.

The interior builds up on a platform that includes the firewall bulkhead, front inner fenders, and radiator support. Interior appointments include bucket seats, floor-mounted pedals, a fire extinguisher, a telephone (3 pieces!), floor-mounted gear shift, and door panels (one of which has what appears to be a machine gun molded into it). The engine compartment contains separate pieces for the battery, firewall, brake booster, and hood latch solenoid. I have to give a lot of credit to the kit designers for the details under the hood: you know that none of this stuff EVER appeared in the comic book, so they had to come up with the whole thing from scratch. They could have taken the easy way out and made it a curbside, but instead they took the time to think things through and lay out a very reasonable and well-detailed engine compartment.

The chassis received similar attention. The front and rear suspension assemblies are simplified, and part of the exhaust system is molded into the chassis, but the end result is a reasonably good facsimile of a 1960’s-era chassis. A bit of detail painting here will really go a long way.

The die-cast metal body is a good facsimile of the comic book artwork. The black paint on my copy was perfectly finished. The trim around the twin windshields is painted silver; some foil here would be a nice touch. The dashboard is cast as part of the body, and the gauge faces have raised details that are rather faint, the glossy black paint covering them makes them even harder to see: it will take a steady hand and a good eye to bring out the details with a paintbrush.

Assembling this kit was pure pleasure. The kit is so well engineered that the pieces practically fall together. Every piece fits in place one way and one way only; it is nearly impossible to put a piece in the wrong place, or in the right place but in the wrong position. The only time I had trouble was getting radiator shroud to fit properly over the engine fan: loosening the screw that held the engine in place allowed everything to slide into position correctly. I also ended up with a slight misalignment trying to mate up the locating pin on the left side exhaust header with its mating hole on the chassis. Delaying the installation of the headers until just before installing the engine into the chassis would probably be wise, as the wet glue would allow some play in the header positioning.

When all is said and done, this kit builds up into quite a nice rendition of a rather unusual subject. With some attention to detail, it can turn into a very realistic vehicle. I would highly recommend this kit.