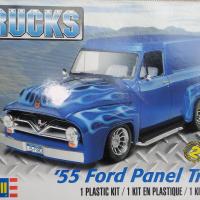 The 1955 Panel Truck is considered to be a part of the F100 Series that lasted up until 1956. It was a sturdy and reliable vehicle for the blue collar workers of the day. I decided to build a vehicle around the same look, with the custom parts added, to a truck that closely resembled my uncle's truck for his catering and restaurants needs. He meant a lot to me and I was very excited to see this kit available for a build on the reviewer's board. There are a few panel trucks out but not many and this one looked very good from the box art. It's rated at a skill level 2 and has just 93 pieces in it. When I opened the box and inspected the contents thereof I seen that it could be built only one way, and that's the way it looks on the box. It is molded in white. So, for me that's a plus. The chrome was impeccable and cut from the sprig without any problems. The kit was without any mold injection marks and did not have any flash to it what so ever.

Some of the highlights to this kit are the styled wheels to compliment the nice wide treaded tires as well as the chrome side pipes. The interior is fairly simplistic with having the dash, steering column and two bucket seats. There isn't anything to go in the cargo department and it is hidden by the fully enclosed sides. I painted them with Testers brush paint, # 1167 Flat Tan (Matte) to give the inside the look many commercial trucks carried. The floor and cargo portion of the vehicle were given the same Krylon Satin Black treatment from a rattle can. The engine looks to be a 351 c.i. power plant ( I could be wrong though ) with all the modern goodies such as the twin carbs and custom chrome air cleaner. I painted the engine compartment in a way that I have not used on all my other builds. Instead of the gloss or matte black I painted it Testors Model Masters Gun Metal. And it looked as good as I'd hoped being a darker gray and all. It was just enough to not give it the same old black look. And like most commercial vehicles are, both yesterday and today, I gave it the exterior color of Testors Gloss White from the spray can. For this review I left it without decals, so it looks very plain.But I am adding the business name of my uncle's restaurant he owned for over 35 years in the northwest suburbs of Chicagoland, where I grew up at as well. I wanted the fellow modelers checking out this review a clear look of this kit. The stance and look of the truck is just right.

As for the decal sheet it has two tone blue flames or a silver striped design to take the customized look further as well as a Ford emblem that is placed on the front of the hood, either New York or New Jersey license plates and a choice of a lighter stock or black custom look instrument panels.

As a closing remark I'd recommend this kit to everyone out there. I appreciate the opportunity I got to build up this model. So, kudos to the Revell designers and the entire company responsible for rereleasing a sensational subject matter in the 1955 Panel Truck. Thank You !!! And also to the IPMS group that worked so hard at getting this model to me. Keep up the great work and ideas. I hope all you fellow modelers like it ! This one was a truly fun build.