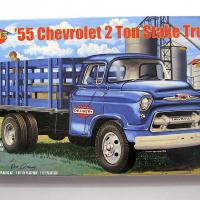 From the kit instructions: Combining passenger car styling with rugged, versatile and dependable truck performance, the Chevrolet Two-ton Stake Model represented the ultimate in commercial vehicle design. One of the most popular models in the famous “task Force” series of 1955, it was seen on the highways and byways across America, hauling loads of all descriptions with the greatest ease and efficiency. Whether it was a load of grain from the local feed store, lumber for the new house down the street, or a gang of kids headed for summer camp, the model 6409 was equal to the task.

It was normally powered by a 123-horsepower loadmaster engine, but could on request have the super powerful Jobmaster engine installed, which delivered 140 HP. Both of those engines were 6 cylinder. Other standard equipment included power brakes, a 12-volt ignition system, concealed safety steps, and a Sweep-Sight windshield. Many other advanced features were available as optional equipment.

Wheelbase of the truck was 154 inches, its gross weight was 18,000 lbs., and it had a total flat area of 85 square feet. Taken all together, the above features made the 1955 Chevrolet Stake Truck one of the finest commercial vehicles on the road, and truly justified its inclusion in the great “Task Force” line.

Opening the box you will find a bag of medium blue injected plastic parts, a small zip lock bag of clear parts, a small decal sheet and a two-page instruction fold out. The plastic has some flash (The initial release of this kit was 1955 so some flash should be expected) pin marks and some sink marks. The new clear pieces are thin and clear, and the decals are in register.

4 steps are needed to build this kit starting with the cab, which is built on the frame. This makes filling, sanding and painting a bit of a chore. Steps 1 & 2 are the cab, engine and bed-to-frame construction. The cab has a few fit issues, especially on the right side, and a bit of filler will need to be used. You now also must add the new clear pieces to the inside of the doors and rear of the cab. Once the cab is assembled you can add the windscreen. Step 3 is for the underside and everything fit pretty well here. Step 4 is the finishing of the bed, cargo and the stakes. The stakes have many pin marks which need a bit of filling.

A fairly simple build, this kit first issued in 1955 has been released 6 times prior to this and it shows its age. However, with the new clear pieces added, it still builds up pretty nice and looks good in a few dioramas that I have seen it in. I recommend this kit to all modelers.

I would like to thank Atlantis Models for this kit and the Review Corps for letting me build it.