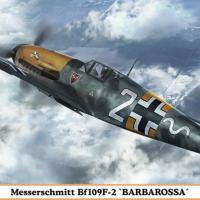 Operation Barbarossa, the famous German invasion of the Soviet Union, was the most titanic clash of arms in all history. The forces arrayed on each side numbered in the millions. The territory captured stretched from the Polish border to the doorstep of Moscow. Everywhere, the Luftwaffe roared overhead. The losses inflicted by the Bf 109 and its compatriots gave Germany total tactical air superiority and very nearly handed Hitler a victory in Russia.

When first released in 1991 the old girl set the standard and has stood the test of time. It has been re-released many times over the years. The gray plastic is still almost flash free and lightly littered with pesky ejector pin marks. The clear parts are decent but showing their age, a total of 67 pieces included. The kit features recessed panel lines with delicate features. The instructions are the standard B&W fold outs we’ve grown accustomed too. Also included is a very small photoetch fret. This kit features two decal options for 1941.

I started by building up the cockpit, all the parts were easily cleaned up and simple to construct. I then painted it and added seat belts. The kit supplies a decal option for the Instrument panel but I opted for dry-brushing this one. Once I was ready to close up the fuselage, I added the prop spinner shaft and oil cooler face. After that, I added the instrument panel and inserted the cockpit tub. Moving along, I assembled the wing, this included the radiator faces and slats. I then attached it with the tailpieces to the airframe. Next, the forward airframe. I added the machine gun barrels, the 2-piece engine cowling, the 2-piece air induction scoop, the exhaust stacks with shrouds and the oil cooler door. The landing gear went together next. The pieces did not align themselves perfectly and proved to be a bit fussy. I finished the build by adding the flaps and all the rest of the smaller parts. A sweet little SA photo-etch fret is provided to represent empennage reinforcements. Overall the parts and pieces cleaned up neatly and fit snugly together. I encountered no other issues worth mentioning. I really enjoyed this one.

Still a great kit and still a bargain on the modeling market. I still highly recommend it to this day, and rate it a solid 8 on the Greg-O-meter. Thanks to Hasegawa, Hobbico and IPMS for the opportunity to present this offering.