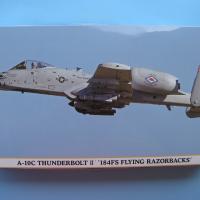 In one of the latest additions to the Hasegawa line of modern military jet aircraft comes the venerable A-10C in a special release that includes markings for Fighter Squadron 184, the “Flying Razorbacks” as depicted on the box top. Also included are markings for the 163rd Fighter Squadron, the “Blacksnakes”, who operate out of Fort Wayne, Indiana. The kit builds up reasonably well, as I have often found to be the case with Hasegawa products, and will make a fine addition for those wanting to add an updated Warthog to his or her collection.

The A-10 Thunderbolt II, more commonly known as the Warthog, first entered service in 1976 after the first prototype flew in 1972. Designed for close air support for ground troops, armed with the 30 mm General Electric GAU-8/A Avenger cannon, and with eleven available hard points, the Warthog was made for a Cold War that fortunately never turned hot. The plane proved its worth during Desert Storm with 144 planes serving in the region, and in addition to destroying a multitude of tanks and other vehicles, managed to shoot down two Iraqi helicopters as well.

The A-10C is the upgraded version of the original aircraft, with the addition of a glass cockpit, a new weapons management system, improved radio and data link systems as well as a new engine, the GE TF-34-GE-100, and improved wings. The plane is 53 feet, four inches long, has a 57 feet, six inch wingspan, and stands 14 feet, eight inches tall. The maximum takeoff weight is 50,000 pounds, which includes an 11,000-pound internal fuel capacity. The combat radius is listed as 250 nautical miles, or 2240 nautical miles during transit with a 340 mph cruising speed and a maximum speed of 439 mph.

Upon opening the box for this kit, the builder is greeted with nine light gray sprues and one clear sprue that hold some 126 individual parts. There are twenty-three items grayed out in the instructions as not being for use with this particular plane. The instructions are on a single sheet of paper, which when unfolded, comprise eight pages of building steps, a marking and painting guide, parts layout and color chart, decal and assembly directions, and a write-up on the A-10. As mentioned previously, there are markings for two aircraft included in the kit, one from the Arkansas Air National Guard, the other from Indiana.

As I mentioned at the start of this review, the kit builds up very nicely, with no serious fit issues to mention, but the fuselage seam did require a fair amount of work. Many of the part fits were impressively tight, which I find far better than items being too loose. The level of detail is good, but I was surprised to find raised panel lines on a kit in 2015. If I read the history of the kit correctly on one of the modeling sites, the Hasegawa A-10 kit was released as a new tooling in 1983. The antennas, external appendages, and glass cockpit decals are all present, but modern stores and sensors for the hard points are conspicuously absent. Although the kit provided ejection seat is adequate, I opted to replace mine with an older, resin ACES II seat from True Details. Although the boxing is for the Arkansas ANG, I had to go with markings for the squadron based in Fort Wayne, Indiana as I grew up a little over an hour away from that city, and I currently live just a few miles north of the Indiana state line.

As far as my hits of this kit are concerned, the pieces were all crisply molded, but there was some excess flash on several of the parts. The level of detail is very good for this scale, and the decals make the cockpit easy to detail. The added parts to represent the C-version adequately dress up the exterior and cockpit, and I appreciated the inclusion of decals for two separate aircraft. I was nervous about the decal for the nose, but it went on without issue, and reacted perfectly to Micro Set and Micro Sol.

Although I had no blatant misses for this kit, as I mentioned previously, I was surprised to see raised panel lines on a modern kit. The lines are very fine, but I had issues with my wash due to them not being recessed. Perhaps in a future release, the folks at Hasegawa will add some modern sensors and weapons for the hard points to better display the capability of this fine plane. The addition of an AN/AAQ-33 “Sniper” targeting pod would be very highly recommended. I would also like to see the addition of either a mask, or at least a decal, to represent the false canopy on the underside.

In conclusion, I would highly recommend this kit to anyone wanting to add the modernized A-10C to his or her collection. With constant debate the past few years on whether to keep or retire the Thunderbolt II, it is nice to have a good representation of what will be remembered as one of the best mission-specific aircraft of the cold war and beyond.

I would like to thank the folks at Hobbico/Hasegawa USA for providing this kit to the IPMS USA for review, to Dave Morrissette, who runs the review corps, for selecting me to do the build, and to you for taking the time to read my comments.