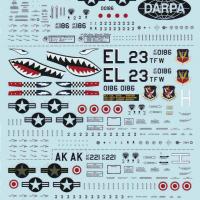 TwoBobs has been producing decals for modern planes for a long time and has tons of superb decal sheets available. Several of the latest sheets deal with the 1/48th scale A-10 Warthog and this sheet, 48274 is titled, “A-10A/C Brrrrt to the Future”, and provides markings for three A-10’s- two A versions and one C version. The markings cover:

Inside the package are full color instructions with all the needed notes to build any of the three planes. All have left and right profiles along with top and bottom profiles. Color call outs, notes on the specific plane and some history are provided. There is one decal sheet perfectly in register and printed by Cartograf. As a bonus note, there are 1/72nd decals provided for the A-10A Snow hog!

One of the things that got my attention was this particular plane. Most A-10’s are gray or in the Euro camouflage scheme. From the sheet, a pair of A-10’s were deployed to Alaska for Operation Cool Snow hog in 1982 for a close air support role. Experimentally, they had white camouflage added over the normal scheme and it makes it unique, so I had to build it. I used a Hobby Boss kit I had laying around and proceeded to build OOB. There are great notes in the instructions about the paint used. The Pave Penny pod was left off due to non guided bombs but the pylon was left on, etc. Once built and glossed, the decal performed flawlessly. They snuggled into place with only the least coaxing. One easy thing was that the white painted areas had no decals. Once done a quick flat coat and the project was finished.

So, great subjects, well researched and cool schemes and flawless decals- what more could anyone ask for! Highly recommended.

My thanks to TwoBobs for the opportunity to review this set and build a unique A-10.