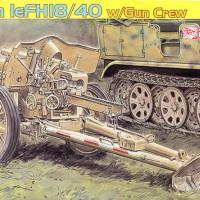 Later in World War 2, the Germans made an effort to upgrade older guns by mounting them on newer, lighter carriages. Sometimes this was successful, sometimes not. The old 10.5 cm leFH 18/40 light field howitzer was just such a conversion. It was updated by mounting it on the tried and true carriage used for the 75 mm Pak 40. The carriage proved to be too light to support the gun well, and there were constant problems with the combination. Nonetheless, it was used from about 1943 until the end of the war.

Dragon’s model of the field howitzer exhibits the same melding of equipment, with the gun carriage clearly coming from their Pak 40 kit. This set also comes with a full five-man gun crew along with a large sprue of their most up-to-date personal equipment, providing a rich supply of material for diorama purposes. Unfortunately, there is only enough new equipment for four figures, so the fifth will have to rely on the older moldings. There are also clear parts for the gun sight as well as a photoetch sheet providing straps for the figures. For the most part, this is a successful blending of two separate kits with only a few hiccups along the way.

The sprues are laid out for ease of assembly, with the gun itself located on one sprue and the carriage on another. Construction of the gun went quickly with no real hitches. The breach can be either open or closed depending on need, and the one-piece, slide-mold barrel helped immensely.

The only glitch in the instructions deals with the oil reservoir mounted above the barrel. There is a brace for this that needs to be used (Part K44), but it is not mentioned in the instructions. In fact, it is listed as one of the parts not used, although it is even clear from the box illustrations that it is. The reciprocating reservoir itself (Part K21) is designed for both at rest and full recoil, so you will need to cut off a fair chunk of the recoil rod at the rear of the piece to get it to sit right unless you intend to have the gun recoiling.

The carriage went together smoothly as well, however, be sure to note which side Parts A17 and A18 fit to; the two do not parallel each other. The instructions include a sub-drawing demonstrating how the two-wheel axles can be pivoted to change elevation, but by that time my main concern was seeing to it that the wheels came out level, which turned out not to be the problem I’d anticipated.

The wheels themselves are done with the new slide technology and look terrific. Just a little light sanding along the outer rim and they were perfect. Don’t be put off by the final drawings in the instructions which show extra equipment attached to the trails; they must be copied from the Pak 40 instructions, because the small tool box and other items shown are not part of the kit. Don’t be surprised that the gun simply slides into a mounting hole on the carriage with no means to make it pivot. You haven’t screwed up, that’s the way the kit is designed. This is not a major problem if, like me, you prefer a static display.

The figures, also holdovers from Dragon’s Pak 40 kit, are not bad but clearly not quite right for this artillery piece. In terms of general stance, there is a sense of urgency to the poses more appropriate to an antitank team. A field artillery team would typically not be directly confronting hostile forces. In addition, two of the figures (C and D) are not really designed to handle the equipment associated with a light howitzer. Figure D is asked to hold a much shorter shell than the figure is designed for, and Figure C is supposed to hold the ram although it’s clear he’s intended to hold another fairly long shell instead. Even so, both figures are fairly easy to modify. Just trim the left arm of Figure D at the shoulder and cut and turn Figure C’s left arm/hand 90 degrees, then both look a bit more comfortable with their new roles.

In terms of displaying this artillery piece in action, my only complaint might be that although the kit provides six shells, there are no bags of propellant or ammo boxes. These can be mustered up from elsewhere, I’d imagine, but it would have been nice if they’d included some to make this set complete.

In any case, the gun and figures certainly look dramatic together and make a fine presentation in and of themselves. For relative ease of assembly as well as providing a host of useful extras, I give this kit high marks. Dragon continues to lead the field in exciting releases.

Thanks as always to Dragon Models USA and IPMS/USA for the chance to build this charming little gun.