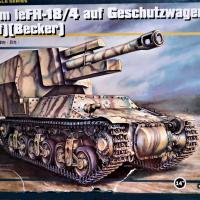 The 10.5 cm LeFH - 18/4 auf Geschutzwagen Lr.S.(f) was a German Army (Heer) self-propelled artillery piece from 1944. The German used captured French Lorraine 37L tractors to mount their 10.5cm howitzer on. Alkett made 24 and Becker made 12. All were lost in combat between D-Day, June 6, and the end of August 1944. This model is of the Becker produced conversion.

The kit contains four sprues packed in two bags along with two bags of metal tracks and a bag of pins for these tracks. A small photo-etches sheet with about 15 parts and a small decal sheet with six decals is also included. The booklet instruction sheet is 12 pages with 14 steps and a separate two-page color inset with the three painting/decals schemes. One of the sprues is marked as A, but in the instructions, it is shown as E. I used a piece of tape to cover the wrong letter up and wrote E on it. The box I got had damage and some parts were broken, but luckily, they were unused parts. The D sprue numbers do not follow any logical order. The numbers are spread out all over the sprue, so it takes a while to find parts.

Assembly starts with the four-piece lower hull and suspension. These pieces fit tightly, and there was a lot of little flash all around the hull frames. Parts A5 and A8, the road wheel mounts, are listed backwards. The three upper suspension springs are all one piece long but divided down the middle with the outer boogie mount. The roadwheels are sandwiched between these two pieces, so I could not leave them off until after painting. There were knock out plugs and lots of flash on these suspension parts that need to be removed or the parts will not fit together. Another instruction error shows the wrong part numbers on the spring suspension. It shows parts A3 joining to A4 and A6 joining to A7, but is should be A3 got to A7 and A4 goes to A6. The drive sprockets fit very loose and wobbly on their mounting pin.

The metal tracks some next. These are a white metal that have a lot of flash that will need to be filed off, or the track links will not fit together. I spent about four hours filing each connection point for over 200 track links. The instructions say to use 107 per side, but I used only 100 per side and got a nice sag. There is a jig included that will hold about 35 links so you can insert the pins. The jig has waves in it like it is for track sag, but this is totally unneeded. A flat jib would have worked better. After inserting the pins with a tweezer, I had to crimp these pins in more with a needle nose pliers. The tracks cannot be left off either until after painting since the gap between the upper suspension and fenders is just big enough for the tracks to fit before installing the fenders. The white metal tracks did blacken up nice in burnishing fluid. I think I would have rather have plastic link and length tracks like Tamiya uses.

The rear spade is very wobbly to assemble. There are no locator marks and the mounting pins shown on the instructions are not on the parts. Also, the bracing plate is way to tighter which makes the mounting brackets flair out. The fighting compartment base is wobbly to line up and glue together. The internal bracing does not line up properly, but mostly will be hidden when done. The floor will need to be left loose to get the front wall inserted. There is also a gap all around the floor and side walls. Photo-etched parts 6 and 7 are the same but are shown on the instruction as mirror images of each other. Part 7 should have rivets on the outside, but I had to put them inside to get this part to mount correctly. Luckily most of this part is hidden later by the exhaust cover. Part B23 is the front engine panel and it is rounded on the top, but the area on the hull is squared off, so a gap is present. The upper fighting compartment walls fit together well but did not fit on to the hull. I realized that there are two pins on the hull that I needed to remove so the front of the compartment will sit flush. The instructions do not show this. There is huge knock out pin marks on the inside that will need to be filled and sanded. The pick head is marked wrong on the instructions, it is part D51, not D48.

The gun is assembled last. The barrel is in two pieces with a nasty seam down the middle. The elevation gear pin was only molded halfway, so my gun will not elevate correctly. The gun shields did not mount symmetrically, so one side is tilted outward. The gun assembly is just glued to the hull without any mounting guides or pins which makes for a sloppy fit. The tool holder will need the holes for the tools to be reamed out or the tools will not slide into them. I made a replacement antenna out of fine wire since the kit supplied on was broken.

I painted the kit with Tamiya German Grey lighted with JN Grey. The decals went down over a gloss coat, but they are thick and the edges around the carrier film is very jagged. I had to use about five applications of Walther’s setting solution to get them to settle down and conform to the kit.

This was a very challenging kit to build with all the instruction errors and parts not fitting well. It reminded me of kits from in the 1980s. The metals tracks sound good when reading about this kit, but they added so much time to construction that, to me, they are not worth it but some will love them.

I would like to thank IPMS and Kitty Hawk/Panda for the chance to review this kit.

Side of box with 2 more painting options

Gap at front of engine compartment

Track link with flash on it

Gun will elevate to a high angle