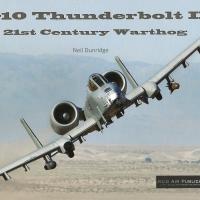 The anticipation of Neil Dunridge's new book A-10 Thunderbolt II 21st Century Warthog was very high among modelers and enthusiasts alike. They certainly were not disappointed. From the eye-opening front cover to the awesome back cover, the author documents the A-10's present life at home and in Afghanistan and Iraq.

Once the reader gets past the Introduction, all the chapters are basically laid out in the same format. The chapters begin with the unit's name, location, and pictures of the unit's emblems. This is followed by the unit's recent history in the fight against terrorism. The unit personnel tell much of it. Some 330 large and crystal clear color photographs accompany the text. The photographs are amazing. There is not a single B&W picture in the book. The photos include aerial shots (many up close), flight line and maintenance activities, weapons loading, and much more. All this gives the reader a real sense of what it's like to be part of one of these units.

This book shows the A-10 in the environment for which it was designed. It is not a walk around book. However, many of the photographs are so clear and so close that it could be used as one. Many of the pictures can be used as a guide in painting and weathering a model A-10 as well as helping with the weapon's load outs. There are numerous ideas for vignettes or dioramas available. The A-10 modeler, and particularly the A-10 aficionado, will love this book. I heartily recommend it.

My thanks go to Reid Air Publications and IPMS/USA for allowing me the opportunity to review this outstanding book.