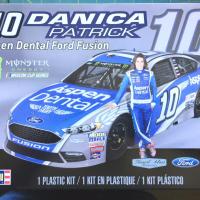 With her Indy car win in Japan in 2008, Danica Patrick has become a house-hold name in racing and a celebrity based on her clever add campaign with Go Daddy, one of her past sponsors. In 2010 Danica moved to Nascar and although she hasn't won any races she has claimed pole position and led a number of laps. She has proven her ability as a racer and follows in the footsteps of Shirley Muldowney and the up and coming Cortney Force.

This kit represents one of Danica's 2017 cars sponsored by Aspen Dental. Running under the Ford Banner for the Stuart-Hass racing team, the car is shaped to represent the Ford Fusion. All the teams ran the Roush-Yates FR-9 engine that season. This 358 CI engine was equipped with fuel injection and were restricted by a plate on the intake manifold to 850HP.

Revells kit is a new mold and the parts are up to current manufacturing standards. There are some ejector marks to remove two of which on the inside of the roll cage paneling are very hard to get to. I did not remove them. If you follow the instructions the engine is the first order of business. The only thing missing here is the Roush-Yates banner on the valve covers. Would have been nice to have a couple decals to represent those. I did add some coil/plug wires because in the photos I found online these were very prominent. The chassis is next and I didn’t have any issues putting it together. The other deviation I took from the instruction sequence was assembling the roll cage so I could made sure the joints were closed and paint the cage as a single unit.

The kit comes with a driver figure and includes decals with stripes and sponsor logos. I didn't use it because I wanted to build the car as if it were sitting waiting for the driver. That required cutting away the safety netting so I could drape it open, removing the quick release steering wheel and making a racing harness for the seat. The netting was cut away and sanded thin so it would lay correctly. A piece of metal wire was used for the attachment bar. For the steering wheel, I cut the wheel off the column and made a stem with brass rod. The seat harness was made from an aircraft seatbelt set that included fabric cut into strips. The buckles and quick release were made from plastic stock and fine solder wire.

The body painting process is probably where this kit received its level 5 rating. There are no specific references to the colors. I went to my local Hobby Lobby with cell phone photo in hand did my best match by eye. The colors chosen were Testors (little bottle) Gloss Grey #1138 and Gloss Blue 1110. The grey was airbrushed first. The next step is the tricky part. The separation of blue and grey has cheat line decals in some places and none in others. I closely cut the cheat lines for the sides and used them to guide the masking. Then I lightened the blue with a little gloss white and airbrushed it over the grey. Once the masks were pulled and the decals were put on, I found only one spot that required some hand painting to touch up.

Speaking of decals, I found them a pleasure to use. They were strong enough to be moved into place but settled really well with setting solution and a wet cloth to press them down. Take a moment to consider the sequence you install them because some overlap others. Once the decals were dry, the model was wiped down and the body was given a coat of semi-gloss clear to seal in the decals and give the car a more scale appearance.

Final assembly is a breeze because the framing on all the clear parts has been done for you. All of them fit once a swipe of the sanding stick took off some small sprue stubs. The wheels and tires go together well but I found the front wheels were difficult to push fully into their sockets for fear of breaking the delicate suspension. I cut off the metal pin axles and glued the front wheels to the brake disks. The final touches that were not included in the kit but are on the box top photo were a radio antenna made with wire and tube and transponder blade from a generic PE set in my spares box.

Although I'm moving in on 40 years of modeling, I've never built a Nascar kit. This was a great introduction. The parts are nicely molded, the instructions clear and decals performed like champs. A little patience got me past the masking stage and the preprinted clear parts cap off a really fun project. This kit is for those with some experience especially if you intend to duplicate the paint job. A younger builder could tackle this with some help. Thank you to Revell for bringing these Nascar kits to market and doing a great job of it. Thanks also to IPMS for the opportunity to add another category of models to my repertoire.